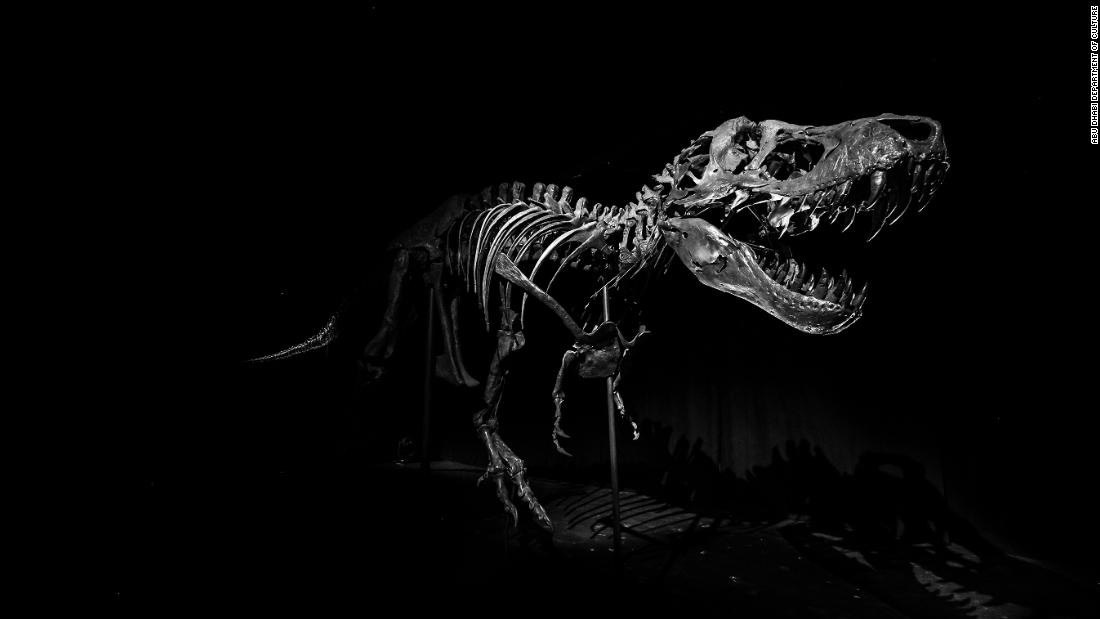 Stan, the world’s most complete Tyrannosaurus rex skeleton, sold for $31.8 million in 2020 — the highest price ever paid at auction for a fossil.
The sale was controversial and the buyer never disclosed. Paleontologists feared the 67 million-year-old fossil was lost to science.
Earlier this year, some thought Dwayne “The Rock” Johnson was its new owner when a T. rex skull appeared behind him during the broadcast of the final ManningCast show of this year’s NFL season.

It turned out to be a replica, however.

Now, the mystery has finally been laid to rest. The 39-foot-long (11.7-meter-long) T. rex will be a star attraction at a new museum of natural history expected to open in 2025 in Abu Dhabi.

The Natural History Museum Abu Dhabi, currently under construction, will be located in the emirate’s Saadiyat Cultural District, which will also be home to the Louvre Abu Dhabi and the Guggenheim Abu Dhabi.

“Now that ‘Stan’ has a new home at the Natural History Museum Abu Dhabi, this 67 million-year-old dinosaur will be in the care of expert scientists, and will continue to contribute to education and research and inspire future explorers,” the Abu Dhabi Department of Culture and Tourism said in a news release.
The Murchison meteorite specimen will also be part of the new museum’s collection. It crash-landed in Australia more than 40 years ago and contained the oldest material material discovered on Earth.

The Murchison meteorite specimen will be featured at the Natural History Museum Abu Dhabi, expected to open in 2025. Credit: Abu Dhabi Department of Culture

Steve Brusatte, professor and Personal Chair of Palaeontology and Evolution at the University of Edinburgh’s School of Geosciences, said it was “wonderful” that Stan will be put on display in a museum.

“This is a new museum, so it doesn’t yet have a legacy of research and conservation, and I hope that Stan will be a permanent part of its collection and available to researchers to study and the public to view, in perpetuity,” he said via email.

“There are not many natural history museums in the Middle East, so Stan has the chance to be an ambassador: for dinosaurs, paleontology, and science. This is welcome news and it alleviates my biggest fear, that Stan would just disappear into the private collection of an oligarch or another obscenely wealthy person, never to see the light of science or the eyes of the public again.”

Standing 13 feet (4 meters) high, Stan is made up of 188 bones, making it one of the largest and most complete T. rex skeletons in the world.

The first of its bones was found in the Hell Creek Formation that spans parts of Montana, North and South Dakota, and Wyoming in 1987 by Stan Sacrison, an amateur paleontologist for whom it is named.

Initially misidentified as Triceratops bones, they lay undisturbed until 1992, when visiting paleontologists realized their true origin.

It then took more than 30,000 hours of manual labor to excavate and restore the skeleton. Researchers have since found that Stan survived a broken neck during his lifetime, after which two of his vertebrae fused together.

There are also signs of puncture wounds in his skull and one rib that may have been caused by another T. rex.

Stan would have weighed 7 to 8 tons — about twice as much as today’s African elephant — and his longest teeth measure more than 11 inches (28 centimeters), with serrated edges.