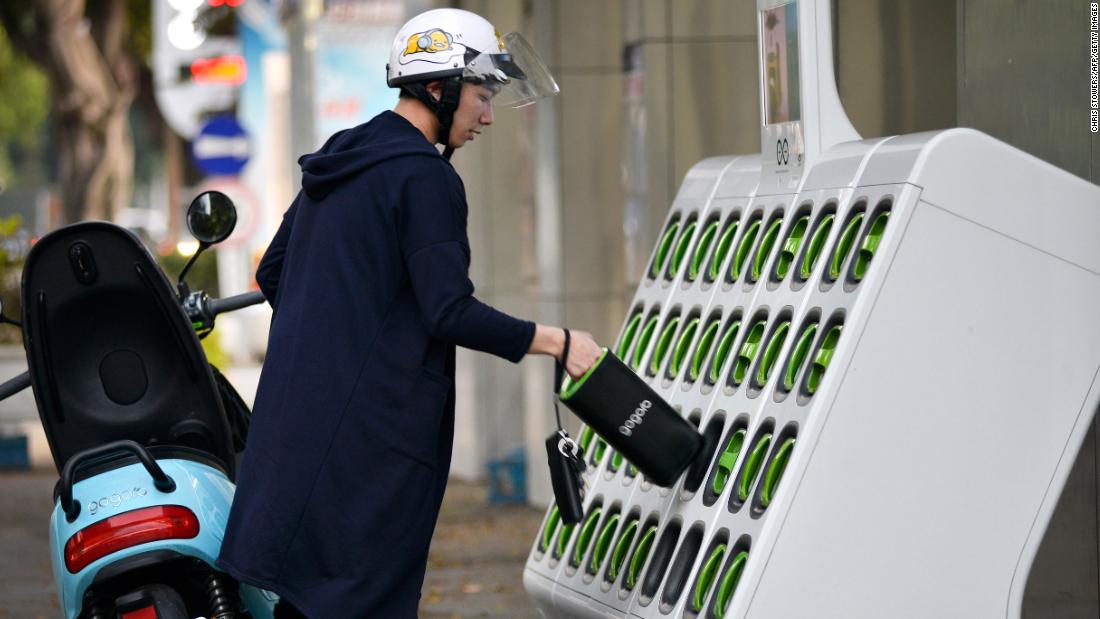 The company will debut on the Nasdaq on Tuesday after merging with a special purpose acquisition company, Poema Global (PPGH). The deal values the vehicle maker at about $2.35 billion. That’s more than triple its last disclosed valuation of $800 million in September 2017.

The Taipei-based firm has raised at least $335 million in cash through the deal, which closed Monday, and will begin trading under ticker symbol “GGR.”

Gogoro was founded in 2011 by CEO Horace Luke, a self-described “mad scientist” who previously led product strategy for XBox at Microsoft (MSFT) and innovation at electronics giant HTC. The company, which is also backed by Foxconn and Temasek, sells its own electric scooters and subscriptions to its battery swapping network.

The network includes thousands of stations that allow riders to easily swap out their batteries within minutes.

Its biggest market is at home in Taiwan, where Gogoro says it powers 97% of all electric two-wheelers. Just less than two years ago, Luke said he felt the company wasn’t ready to expand beyond the compact island.

Now, “we’re more than ready,” he said in an interview with CNN Business Tuesday, adding that the proceeds from its public offering would allow it to scale abroad and “get more aggressive” in places like China, India and Southeast Asia.

The company is embarking on international expansion, with the goal of deploying in at least six cities across mainland China, one city in India, and further throughout Jakarta over the next year.

“We got the partnerships set up, we got the technology set up,” said Luke.

Much of its playbook will rely on tie-ups with players like Hero Moto, which bills itself as the world’s largest manufacturer of motorcycles and scooters. Gogoro announced a partnership with the company last year in India, one of the biggest two-wheel vehicle markets globally.

The deal will help bring Gogoro’s battery swapping stations to India, and allow both companies to develop new vehicles that will be branded as Hero but powered by Gogoro’s batteries, they said in a statement.
In China, the company has teamed up with two of the country’s leading two-wheeler manufacturers, Dachangjiang Group and Yadea.
In Southeast Asia, Gogoro has joined forces with Gojek, an Indonesian ride-hailing provider, on a pilot scheme for smart scooters.
But electric scooters have faced greater scrutiny lately, as reports emerge of vehicles catching on fire around the world, including in India and China.

Luke argued that Gogoro’s scooters are inherently safer because users can return batteries to designated stations where the technology is consistently checked, versus forcing them to charge them on their own at home or elsewhere.

The executive sees scooters as just the beginning of an electric revolution.

“There’s a lot of applications that we can use for these batteries beyond mobility,” he said, noting Gogoro’s plans to help power smart parking meters or traffic lights. “Think of us as portable batteries, except much bigger.”

Luke said that the company chose New York for its offering because of the deep pool of liquidity, and investors’ ability there “to see beyond today.”

He said he had not thought about dual listing in Taiwan yet, but acknowledged that there were potential challenges that come with debuting in New York.

Many people in the United States may not “understand the importance of two wheelers,” he added.

Young people these days “are looking at Tesla,” said the CEO. But the majority of riders in cities such as Bangkok, Mumbai and Ho Chi Minh City may never be able to afford those electric vehicles, he added.

Gogoro fills that gap, he argues.

“If you thought Tesla was great, you should look at Gogoro,” said Luke, adding that the company was sometimes dubbed “the little baby Tesla, or the Tesla of two-wheelers.”

“That electrification of transportation, especially with Tesla leading the way, [creates] a great tailwind for us.”