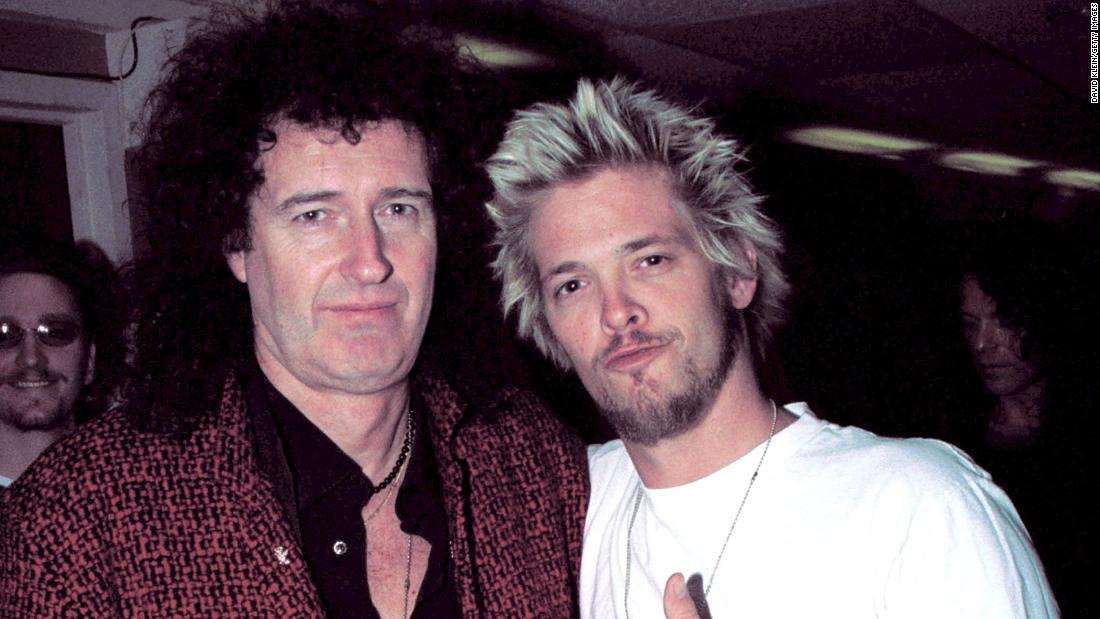 Hawkins died at age 50 Friday while on tour with Foo Fighters in Colombia. He had drummed with the band for more than two decades.
“Queen were my first concert and every concert since has been a bit of a letdown,” Hawkins told the Hall of Fame audience when he inducted the band in 2001. “Two of the best hours of my life.”

Hawkins had previously said Taylor spurred his desire to get behind the drum kit.

Hawkins described Taylor as his mentor, going on to perform on stage as part of Foo Fighters with Taylor and Queen’s Brian May.
In a 2019 Foo Fighters performance in Atlanta, Hawkins said his older sister had taken him to the Queen concert. “I watched the f*ckin’ drummer and I said, I wanna f*ckin’ be him. I wanna do that,” he told the crowd. He then revealed that Taylor was onstage before they launched into the Queen hit “Under Pressure,” with Taylor on drums.

The Queen drummer who had so inspired Hawkins as a boy paid tribute to his protege after news of his death, saying Hawkins had been a mentor to his own son.

“Like losing a younger favorite brother,” Roger Taylor wrote Saturday on Instagram. “He was a kind brilliant man and an inspirational mentor to my son Rufus and the best friend one could ever have. Devastated.” Taylor later posted a photo of Hawkins, Red Hot Chili Peppers drummer Chad Smith and himself on Instagram.

Comments paying tribute to Hawkins and praising the trio flooded in, describing them as “Three Gods of Rock,” legends and “three of the best drummers.”

In the 2014 interview with Cooper, Grohl — who played drums in Nirvana — talked about Hawkins’ impact on the group.

“When you have a drummer like Taylor Hawkins in your band, I don’t necessarily miss being the drummer — because I have the greatest drummer in the world,” Grohl said.