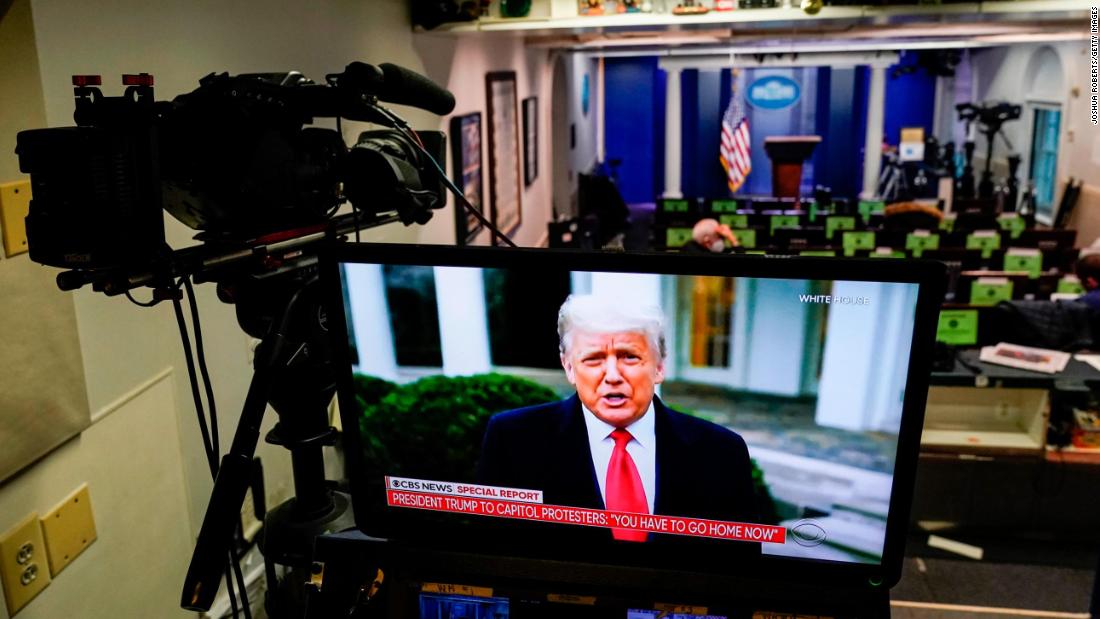 While the call is not specifically noted in the presidential diary or the presidential call log, its existence has been corroborated by multiple sources who were with Trump and Pence that day, including former aides who testified before the House select committee investigating the US Capitol attack.

The mystery of the seven-hour gap has fueled furious speculation as to why calls are missing. That includes allegations that Trump was using “burner phones” (which he has denied) or that the logs were purposely suppressed.

The missing calls underscore something more endemic: the imperfect and antiquated system of tracking a president’s communications.

The White House call log is generated by a switchboard system that dates back to the 1960s, according to the National Archives. The version installed in 1963 was already considered “somewhat outdated” just two decades later.

And it’s certainly not one suited for the era of cell phones and text messages or to a President well known for his efforts to circumvent official channels of communications.

There could be various reasons that explain the gap in the call log itself.

One possibility is that Trump was speaking to people from a cell phone. As CNN has previously reported, Trump had a habit of using his and other people’s phones to make or receive calls.

Another explanation could be that Trump had aides place direct calls from the Oval Office, bypassing the switchboard.

A former White House staffer who served in the Obama Administration told CNN that if then-President Barrack Obama wanted to make a call to someone from the Oval Office, he would normally ask an aide seated nearby to dial the person. The aide would then call the number and hit transfer to connect the caller to the President.

Another factor seems to be where Trump was when he made certain calls. All the calls noted from the January 6 log indicate they were made from the White House residence, suggesting Trump relied on the switchboard to put those calls through. The missing calls appear to start when the diary notes Trump has moved from the residence to the Oval Office.

Trump used the switchboard more often when he was in the private residence, according to multiple sources. But when he was in the Oval Office, the former President would often direct aides sitting outside his office to get certain lawmakers or allies of his on the phone.

Two former Trump officials believe this, plus the chaotic nature of the West Wing on January 6, is what led to the gaps in the call logs.

Calls also should have been documented in the Presidential Daily Diary, which is compiled by an Archives employee detailed to the White House. While it’s supposed to include “impromptu moments such as staff member drop-ins and telephone calls,” the diarist’s account is only as good as the information he or she receives from the President’s staff.

The former Obama staffer also acknowledged this process was more of an honor system and dependent on how meticulous aides serving in other administrations were or what instructions they were given.

No explanation has been given so far why calls known to have been made in the hours Trump was in the Oval Office are not documented in the presidential diary.

Multiple sources have described the record-keeping during the Trump administration as generally chaotic. Those sources, as well as witnesses who have testified as part of previous congressional investigations related to the former President’s conduct described Trump as deeply suspicious of the White House switchboard and detailed various ways he sought to avoid having records of certain phone calls from being kept.

A Senate Intelligence report from 2020 includes witness testimony from former aides saying that Trump regularly used the cellphone of his body man, Keith Schiller, to place calls to Republican operative Roger Stone because he did not want his to advisers to know they were talking.

“Trump hated people knowing who he spoke to, including from the residence at night when they went through the switchboard,” one former Trump official told CNN.

When John Kelly was Trump’s chief of staff, he monitored the switchboard to see who Trump was talking to. Trump would often tell people to hang up and call him back on his cellphone if he didn’t want it showing up on the switchboard call log.

When Mark Meadows took over as chief of staff, sources said he restricted the number of White House officials who had access to the call logs, limiting the group to only a small number of top aides.

Filling in the gaps

Despite the gap in the call logs, the House select committee is relying on witness testimony, additional documents and phone records obtained via subpoena to begin piecing together who Trump spoke to that day.

This is especially true for the missing call to Pence. That call is a key point in the House’s argument that Trump was taking part in criminal activity, as he kept pressuring Pence to block Congress from certifying the election. Trump has not been charged with any crime.

Pence’s former national security adviser, Keith Kellogg, described the call in his testimony before the committee earlier this year, telling investigators that he and other top aides were in the Oval Office with Trump when it took place. He said he could only hear what Trump said, and not Pence’s responses.

Kellogg’s recounting of the conversation was cited in the committee’s letter in late January to Trump’s daughter, Ivanka, requesting that she too appear before the panel and cooperate in the probe.

CNN reported last month that Ivanka Trump was in discussions to voluntarily appear before the committee for an interview. Others who witnessed the call take place have already testified.

Committee members have said that witness testimony is not the only way they have been able to fill in some of the gaps in official records like the White House logs and daily diary.

“Whether it’s a witness who is unwilling to cooperate with us or whether there are gaps in documentation that we have received, we will get that information some other way,” Rep. Stephanie Murphy told CNN+’s Kasie Hunt on “The Source” on Wednesday. “Those conversations weren’t one-way conversations. There was somebody on the other side of those conversations and we’ll get the information that way.”

“We’re triangulating basically from a lot of different angles and we are getting a fulsome picture of what happened in the run up to and on the day of January 6th,” Murphy added.

Mississippi Democratic Rep. Bennie Thompson, the chairman of the select committee, told CNN on Wednesday the panel has not received any vice presidential phone log records from the National Archives.

One call is noted in the presidential diary even though it is not in the call log that day.

The presidential daily diary handed over to the panel does show Trump placed “a phone call to an unidentified person” at 11:17 a.m. on the morning of January 6 but does not make reference to the 11:20 a.m. call. Neither conversation is reflected in the White House call log.