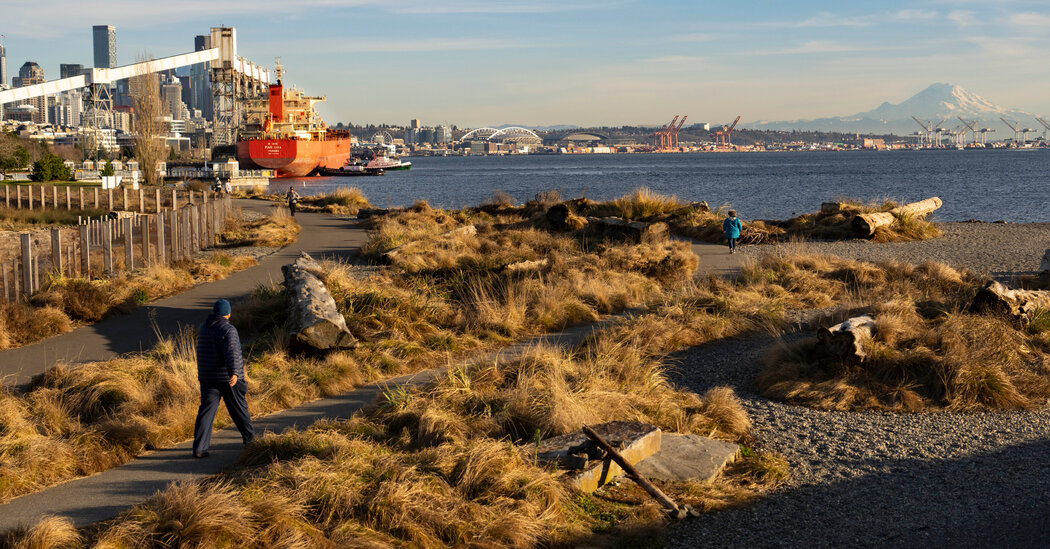 When the online travel giant Expedia Group unveiled its $900 million Seattle headquarters in 2019, the 40-acre waterfront campus showcased numerous amenities: a bike path, a soccer field and a beach strewn with driftwood logs for sitting amid the sounds of surf.

It also has some well-curated dirt.

Landscape architects from Surfacedesign in San Francisco focused on extensive natural habitat restoration for the project, a former industrial site that at one point was two piers in Elliott Bay filled in with garbage. That meant meters-deep soil replacement to ease the seeding of native plants, grasses and a coastal meadow.

The overhaul required months of work, a soil scientist to help create a microbiome and nine separate soil profiles, and the use of “compost tea blends,” a kind of organic liquid fertilizer that restores nutrients in the soil without chemical fertilizers.

The idea was to avoid a “manicured, mulched-to-death look,” said Josh Khanna, director of real estate services at Expedia. The new headquarters are anything but a “little corporate concrete bunker,” she added.

“All of a sudden, there’s a big shift for clients, who are hungry for a big vision,” said James A. Lord, one of Surfacedesign’s founding partners. “They intuitively know there’s more to be done, that it’s a shift from being just an amenity.”

Developers have long used open spaces and nature as selling points for their projects, like planned communities centered on golf courses, developments built in and around nature preserves and a new trend known as agrihoods, which integrate subdivisions with working farms.

Increasingly, developers don’t just aim to preserve nature, but also promote their role in restoring it. This shift speaks to changing attitudes about the connection to nature, perceptions about being a sustainable corporate citizen and the contradiction of posing real estate as a vehicle for restoration.

“People don’t have to use the word ‘sustainability’ anymore, because it’s expected,” said Charles A. Birnbaum, founder and president of the Cultural Landscape Foundation, an education and advocacy group. “People expect a level of performance from their landscapes. There is a power of place that’s there waiting to be unlocked.”

Prominent projects in the works include visions to restore or recreate natural habitats. For example, River Ring, a pair of apartment high-rises on the Brooklyn waterfront designed by Bjarke Ingels Group and James Corner Field Operations, will include tidal pools and salt marshes that provide black-crowned night herons and snowy egrets a place to forage.

Across the city in the Rockaways, Arverne East will include a 35-acre restored beachfront and nature preserve on the site of a long-abandoned parking lot. A developer in Utah has proposed dredging a lake to create a chain of 34 islands totaling 18,000 acres of land, including some set aside for an animal habitat.

A series of trends have made these projects more valuable, said Matt Norris, director of the Building Healthy Places Initiative at the Urban Land Institute. For residents, the health benefits of outdoor access are more apparent, especially in the pandemic. For developers, offices and homes next to parks can accrue up to 20 percent more value, and added green space can help projects earn community support and even unlock zoning incentives.

The park and marshland at River Ring is a bid to create a “world-class, desirable place to be,” which helped during a contentious approval and entitlement process, said Bonnie Campbell, a principal at Two Trees, the Brooklyn developer behind the project. New York has invested extensive resources in providing public access to the East River in the last decade.

But there are unquantifiable benefits of creating a tidal marsh, where one can touch the water, she said.

For cities, restored nature helps increase equitable access to parks, something they can’t address as aggressively as they would like without private support. Coastal parks help make waterfronts less susceptible to rising water and storm surges.

“More of this is better, in terms of restoring habitat, because we have a long way to go in terms of preserving habitat and managing storm water,” said Sean Dixon, executive director of Puget Soundkeeper Alliance, a nonprofit conservation organization in Seattle. “I’m seeing a lot of developments with splashy parcels on the waterfront doing this.”

But judging restoration efforts focused on a system as complex as nature can be tricky, said Bethanie Walder, executive director of the Society for Ecological Restoration, a nonprofit global alliance.

The organization’s tool for measuring recovery efforts, called the ecological recovery wheel, factors in a wide scope of benefits, including animal population recovery and resilience, but operates in holistic, general terms without quantifiable specifics.

“Everything isn’t greenwashing, and everything isn’t restoration,” she said. “We have to think about it on a case-by-case basis. We have to figure out how to live with nature, and not destroy nature.”

Restored or abandoned commercial or industrial sites, like the Arverne East project in the Rockaways, try to make the case for developments with an ecological mission. The 116-acre oceanfront site is under development by L+M Development Partners, the Bluestone Organization and Triangle Equities and will include 1,650 apartments, townhouses and bungalows; commercial space; and solar and geothermal power generation.

The development team, including certified arborists, horticulturists and ecologists, along with the New York City Department of Parks and Recreation’s Natural Resources Group, meticulously evaluated and replanted the site. An unruly bramble of plants that initially had to be explored with a machete in hand, the new preserve will soon blossom with native trees and other plants.

“I won’t go as far as to say it’s a wilderness,” said Laura Starr, a lead landscape designer of the project and principal at Starr Whitehouse. “But the idea of a preserve is that it’s there to preserve natural habitats or a fauna.”

Developers may not be able to precisely measure how these new landscapes benefit the wider environment, but they will quickly get a sense of how much such green bona fides cost in terms of maintenance. Many are required by law to include nature-based features in projects and maintain them as if overseeing a city park. But part of the long-term value of more restorative projects, which often go beyond requirements, is their lower maintenance costs: Native plants in a more natural environment require less costly care, while more resilient landscapes will suffer less long-term degradation.

The developers at River Ring, for example, believe that more natural shorelines, filled with plants and natural beaches instead of concrete bulkheads, will resist water and wave damage better.

“We hope to create a riparian edge that supports itself with ecology rather than this man-made bulkhead infrastructure that we have to continually maintain,” said Ms. Campbell of Two Trees.

The same change is expected at the Expedia campus. As perennials and beehives slowly establish themselves, the environment will begin to stabilize, and a large section of the campus will become self-maintaining, if not self-sustaining.

“It doesn’t mean life will thrive as quickly as you want it to, and in the ways you expect,” Mr. Dixon of Puget Soundkeeper Alliance said. “That’s hard to pin down for places that have been industrially denuded for 100 years. But there’s immense value for these large facilities redeveloping properties to go big or go home and provide community amenities like this.”