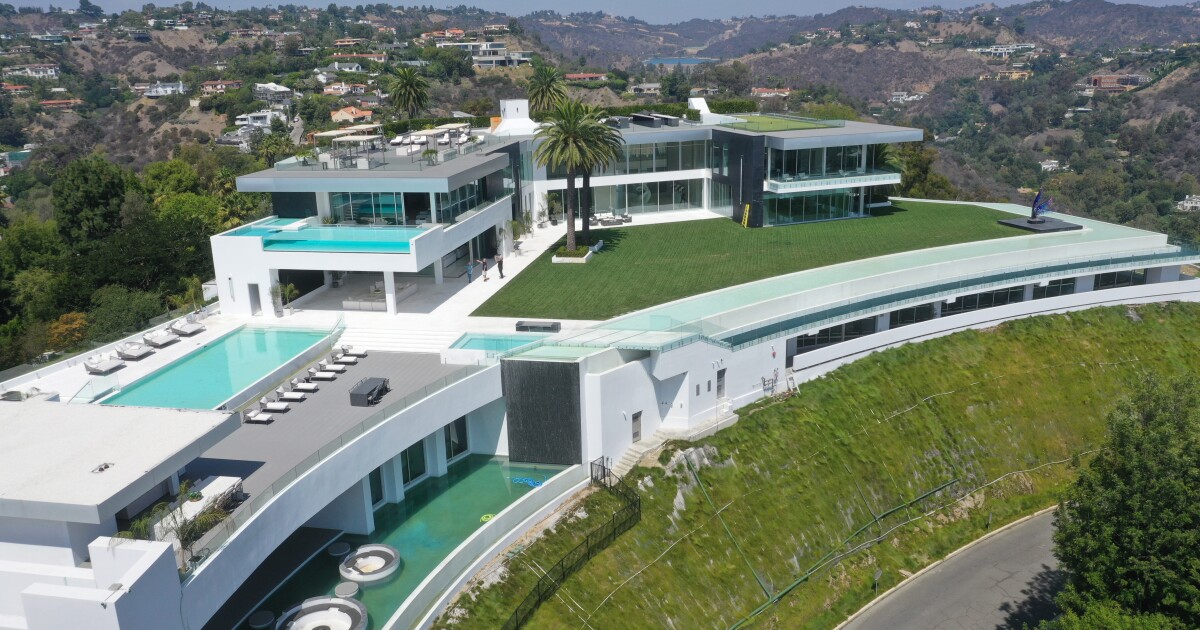 The $141-million offer by Fashion Nova founder Richard Saghian for the Bel-Air mega-mansion known as “The One” was approved Monday by a U.S. Bankruptcy Court judge.

The ruling by Judge Deborah Saltzman followed a two-day court hearing during which creditors opposed to the sale alleged that Saghian’s bid should be found inadequate because the three-day auction for the sprawling estate came within a week of Russia’s invasion of Ukraine, scaring off bidders.

Attorneys for Saghian, the bankrupt estate and other creditors — who acknowledged the bid was disappointing — countered that there were other crucial reasons the offer came in at half the home’s $295-million asking price. They further argued that there were no guarantees the world’s geopolitical situation would improve if another auction were conducted in months.

Saltzman said that although the “proposed sale doesn’t feel like a success to anyone except maybe the proposed buyer,” she ruled that it met all legal criteria for approval. She also said she would not insert her own judgment into whether a second auction would have resulted in a better outcome.

“There have been credible arguments that perhaps markets could have adjusted and that things would be different now, but there are also arguments to suggest that things could be worse now,” she said.

The 105,000-square-foot marble-and-glass home on a Bel-Air hilltop remains unfinished and carries more than $250 million in claimed debts. Saghian’s $126-million bid, which totaled $141 million after auction fees, means many creditors are facing substantial and even total losses for the house, which has been under construction for nearly a decade.

The trophy home’s winning bid was a mega disappointment, failing to break the California record set in October by venture capitalist Marc Andreessen, who purchased a Malibu estate for $177 million. It was also well under the $238 million a hedge fund mogul spent in 2019 for a penthouse overlooking New York’s Central Park, the U.S. high-water mark.

Saghian was one of just five participants in an online auction that started Feb. 28 and concluded March 3. The home’s developer, Nile Niami — who says he is owed some $44 million in loans made to the project — had hoped to assemble a last-minute $250-million offer, but that didn’t come about, leaving only the fashion mogul’s bid on the table.

Saltzman told creditors on Friday that she would be weighing the decision based on case law that would allow her to set aside Saghian’s bid if it was found to be “grossly inadequate.” In making her ruling, she said she considered the sale price “fair and reasonable.”

Creditors who wanted the bid set aside noted that Crestlloyd, the bankrupt limited liability company that owns The One, had said in court papers that the property was worth $325 million. They also highlighted a 2019 appraisal conducted while construction was ongoing that valued the property at $228 million.

“It cannot be that the fear of this war and with the potential for World War III … did not impact [the] bidding auction process,” Niami’s attorney Hamid Rafatjoo told the judge Friday.

An attorney for creditor Inferno Investments, which has lodged about $31 million in claims against the estate, argued that even if the war was ongoing in a few months, bidders would be adjusted to it by then.

Backers of the sale said that Crestlloyd’s estimate of the property’s value and the 2019 appraisal were not realistic and that conducting another auction could result in a lower bid. And they said the five bidders were in line with what Concierge expected. Saghian’s attorney had told the judge that his client might not participate in a second go-round.

Sale backers also pointed out that no other bona fide offers had come forward in the weeks since the auction, even though Crestlloyd had said that it would entertain them — something the judge noted in her ruling. Two of the attorneys also questioned in arguments Monday why sale critics hadn’t made their own emergency motions to delay the auction.

“It’s all speculation what happens tomorrow, next week. World War III happens in two months and we’re in this for God knows how long,” Thomas Geher, the attorney for Hankey Capital, argued on Friday.

Hankey Capital, the real estate lending arm of Los Angeles billionaire Don Hankey, made more than $100 million in loans to the project and is first in line among lenders to be repaid, though it may not be made whole.

The bid supporters argued that what really damped enthusiasm for what is by far the largest home in Los Angeles and potentially the largest new home in the country is that it is unfinished and does not have a certificate of occupancy.

Moreover, getting the certificate, which would allow the new owner to move in, could well be an arduous process, they said.

Before The One was placed into bankruptcy last year, Niami defaulted on some $106 million in construction loans from Hankey, who foreclosed on the property and put it into receivership. While in state court, allegations were made that the home had construction defects and violated various zoning codes.

During Friday’s court hearing, the home’s brokers and Concierge Auctions President Chad Roffers testified that some ultrawealthy prospective buyers were scared off by the challenges.

Roffers said the concerns from neighbors — including the Bel-Air Assn. — were particularly worrisome. That homeowners group, which has called The One a “growing scandal,” was involved in having an illegally constructed Bel-Air mansion by developer Mohamed Hadid torn down.

Roffers’ testimony also seemed to back the allegations of construction defects when he said the mansion suffered significant damage during December’s record rainfall that required Crestlloyd to scramble to make repairs so it could be shown to prospective bidders. It also resulted in the auction being delayed.

It came to light during the hearing that the Los Angeles Department of Building and Safety conducted a recent inspection and has alleged the mansion exceeds its approved height, which would require any owner to reduce it or apply for a variance.

Saghian’s attorney Sam Newman said Friday that his client has realized since the auction that the situation is more complex than he thought and that it was unclear how much money would have to be spent to allow the fashion mogul to move in.

“I’m grateful that Judge Saltzman approved my bid and I look forward to collaborating with the City of Los Angeles, the Bel-Air Association, my new neighbors and my design team to complete and perfect this iconic property,” Saghian said in a written statement after the ruling.

Recently deemed a billionaire by Forbes, Saghian, 40, already owns two area homes, one in the Hollywood Hills that he bought for $17.5 million in 2018 and another on a Malibu beach that he purchased for $14.7 million last year. The hillside home was designed by Paul McClean, the architect who designed The One.

The fashion mogul wholly owns his company, which sells trendy, inexpensive fast fashion and has seen annual sales grow to exceed $1 billion, according to a source close to Saghian. Fashion Nova has benefited from clothing deals with popular stars such as Cardi B and Lil Nas X, as well as the support of a legion of social media influencers.

Niami is a former movie producer who has developed many trophy homes but saw sales dry up in recent years. He considered The One the culmination of his building career and once had hoped to sell the mansion for $500 million, though many viewed the price as a marketing ploy.

Before his effort last week to assemble a last-minute bid, Niami made other unsuccessful attempts to hold on to the property. A year ago, he proposed turning the home into an events space with boxing matches and concerts. Then he made a public call in December for a partner to establish a cryptocurrency backed by the property that would pay off all its debts.

There is little doubt the property with 21 bedrooms and 42 full bathrooms is extraordinary. It features a 4,000-square-foot guesthouse, servants’ quarters, a moat and multiple pools, a wellness spa, a beauty salon, a four-lane bowling alley and a multiplex-size movie theater, just to name a few of its luxury amenities.

The $141-million bid price will leave $138 million in proceeds to the bankrupt estate once it receives negotiated rebates from the 12% auction fee. The next step will be to distribute all the proceeds, though Saltzman made some initial rulings, including that the real estate commissions should be paid. She said it was clear the brokers did their job to sell the property.