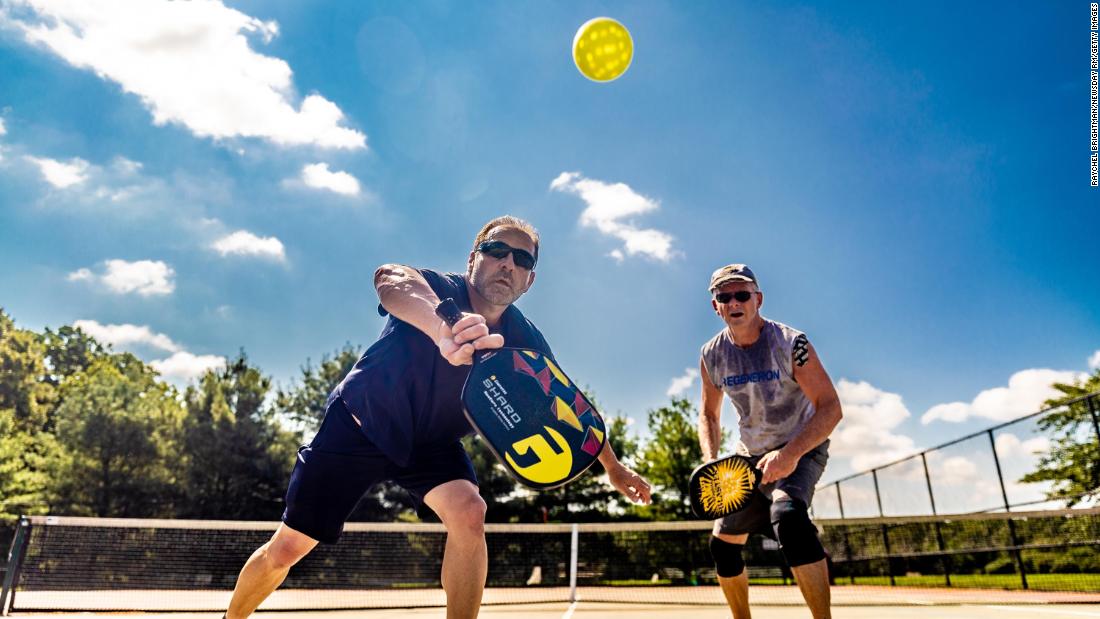 So the dads — Joel Pritchard, Bill Bell and Barney McCallum — got creative. They used the items at their disposal, including some ping pong paddles, an old badminton court and a perforated plastic ball, and invented a new game for their kids to play.

With that, pickleball was born.

From that humble start, their game gradually evolved into a sport with official rules and better equipment. And today, partly because of the pandemic, it’s having a moment.

An estimated 4.8 million people in the US now play pickleball. Participation has increased by 39.3% in the past two years, making it the country’s fastest-growing sport, says Laura Gainor, a marketing consultant for the USA Pickleball Association, the sport’s national governing body.
There’s a pro pickleball tour, with some matches airing on ESPN. Pickleball aficionados are pushing for it to be included in the Olympics. It’s captivated such celebrities as talk show host Ellen DeGeneres, actor Leonardo DiCaprio and philanthropist Bill Gates.

Here’s everything you need to know about the emerging sport with the quirky name.

Pickleball is a mashup of tennis, ping pong and badminton that can be played indoors or outdoors, by single players or in pairs.

It’s played on a court with a low net — 34 inches high at its center. A pickleball court is 20 by 44 feet — the same size as a doubles badminton court.

Many people play on tennis courts that have been modified with lower nets and additional boundary lines.

Players use a perforated plastic ball and wooden or composite paddles that are about twice the size of ping pong paddles. Like other racquet sports, the goal is to hit the ball over the net — but within the boundaries of the court — and prevent your opponent from hitting it back.

Why is it so popular?

The pickleball craze has been fueled by several factors.

It’s fun and social, and the rules are easy for beginners to learn, Gainor says.

Players can pick up the sport in a single session and don’t need any expensive gear or special apparel — just sneakers and comfortable clothing.

The small court means little running around. This has made the sport especially popular with older players whose stiff backs or aching knees make it harder for them to scramble around larger tennis courts.

The demand for safe, distanced activities during the pandemic has also helped fuel the sport’s growth. Pickleball nets sold out when quarantines first went into effect two years ago, Gainor says.

Where is it played?

It’s played in 70 countries and growing, according to the International Federation of Pickleball.
The United States and Canada combined have about 9,500 pickleball venues, including senior residence communities, YMCAs, recreation centers, schools and parks.

There’s a push to expand the list of countries and get pickleball recognized by the International Olympic Committee. One of the requirements to enter an Olympic bid is for a sport to have players in at least 75 countries, Gainor says.

How did it get its name?

Accounts vary on the name’s origin. But one thing’s for sure: There were no pickles involved.
One story says the sport was named for Joel Pritchard’s family dog, a cocker spaniel named Pickles, who loved chasing the plastic ball and running off with it. The game ball sort of became Pickles’ ball — hence the name.

The top female pickleballer is a former elite tennis player

Catherine Parenteau and Ben Johns are the top-ranked female and male players, respectively. Both started as tennis players before transitioning to pickleball.

Parenteau, 27, is a Canadian who was playing tennis at Michigan State University when her coach asked her if she’d be interested in pickleball.

“I said ‘No, I don’t want to, it has a weird name,'” Parenteau says. But she gave it a chance, and she was hooked.

She started playing in October 2016, and competed in the prestigious US Open Pickleball Championship six months later. She’s now top-ranked in the world in both women’s singles and doubles.

Parenteau plays full-time, with a few breaks during the winter. This year alone, she has plans to play in 22 tournaments around the country. Living in Naples, Florida, allows her to play and practice outdoors year-round.

In the six years she’s played, she’s experienced the shift in the sport’s perception.

“What’s kind of cool is when I used to travel for a game a few years ago, people had no idea what pickleball was,” she says. “But now, people know what it is. But there’s still work to be done because a lot of people don’t know it exists on a professional level.”

Parenteau, a former elite tennis player in Canada, still watches tennis, but she no longer plays the sport.

The top male player is a college student

“Playing both tennis and table tennis, pickleball seemed like it was right in between the two, so I gave it a try and loved it,” he says.

In between his material science engineering classes at the University of Maryland — he graduates in the spring — he’s also playing 22 tournaments this year.

Johns is top ranked in men’s singles and doubles,the latter of which he plays with his older brother, Collin Johns. His favorite person to play pickleball with? His 5-year-old sister — a testament to what he calls the sport’s simplicity and multigenerational appeal.

“It’s a lot of fun and easy to learn the rules … the mechanics of the game are such that an 85-year-old can play with an 8-year-old,” he says.

The 22-year-old keeps a busy schedule. He owns Pickleball Getaways, which plans all-inclusive pickleball vacations all over the world. Several of its upcoming summer trips to Croatia and Portugal are sold out. He also runs a subscription instructional video company, Pickleball 360.

With the sport quickly becoming more mainstream, both players say they’re excited about sharing it with a wider audience.