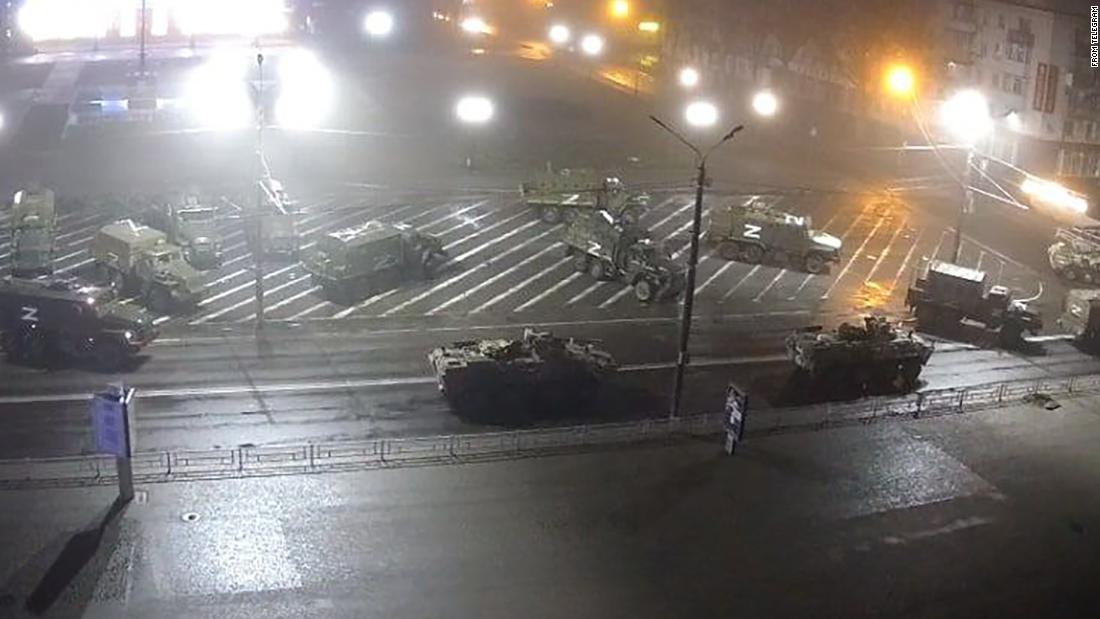 As the day wore on, Abba said, the rattling of bullets and thuds of explosion began to fade. At around midnight, silence descended on the city.

Kherson, a key port city on the Black Sea, in southern Ukraine, was overrun by Russian forces in the early hours of Wednesday, after days of heavy bombardment and shelling. The Ukrainian flag was still hoisted on government buildings, and the mayor of the city, Ihor Kolykhaiev, remained in his post.

On Saturday, Kolykhaiev announced that Russian troops were everywhere, and the city of nearly 300,000 people was without power and water, and in desperate need of humanitarian aid.

Kolykhaiev said that the Russian forces had “settled in” to the city, and showed no signs of leaving.

“We have a lot of people here in need. We have cancer patients. Children who need medication. This medication is not currently getting through to them,” he told CNN, adding that the Russians wanted to send aid, but residents were refusing it.

People living in Kherson under Russian occupation describe days of terror confined to their apartments and houses, fearful to go outside for even basic necessities — their city now a dystopian shell of the home they knew and loved.

Checkpoints manned by Russian troops pepper the city’s streets, five Kherson residents told CNN in recent phone calls. The roads are virtually empty because inhabitants have either fled the fighting, or are staying indoors for fear of encountering Russian soldiers. Grocery stores have been emptied and medicine is running out, residents and officials said.

Russian troops have encircled the city and are shooting at anyone who attempts to leave, according to the residents, including a top local health official who CNN is not naming for security reasons.

“Even if we wanted to evacuate women and children from here, it’s just plain impossible. They shoot at anyone who tries to leave.”

On Thursday, Russian forces shot two men at a checkpoint after they attempted to pass, killing one and seriously wounding the other, the official told CNN.

Russian troops have also prohibited ambulances from leaving the city’s perimeters to reach villages in the province, according to the official. A woman going through a long and dangerous labor in the outskirts of the city had to resort to a panicked video consultation with her doctor because Russian forces had blocked a medical team trying to assist with the birth, the official said.

“After about a day of the local authorities begging the Russians, the mother and the child were allowed to pass to the hospital,” said the official. “It was horrible.”

Andriy Abba, who works as a tax lawyer, says he is determined to stay in Kherson regardless of the occupation, for as long as the Ukrainian flag remains flying on government buildings.

“Even if we wanted to evacuate women and children from here, it’s just plain impossible,” he added. “They shoot at anyone who tries to leave.”

Ukrainian authorities have been working to establish the safe exit of civilians from besieged areas in ongoing negotiations with Moscow. Russia agreed to hold fire Saturday from 9 a.m. Kyiv time, and create humanitarian corridors allowing residents to escape the southern cities of Mariupol and Volnovakha — the first tangible sign of cooperation.
But the agreement quickly fell apart, stalling evacuations, Ukrainian officials said. The government accused Russian forces of shelling the cities, and even targeting the evacuation corridors out of them.
“Surrounded cities that are being destroyed” are “experiencing the worst days,” Ukrainian President Volodymyr Zelensky said in a statement on Saturday.

“Humanitarian corridors must work today. Mariupol and Volnovakha. To save people. Women, children, the elderly. To give food and medicine to those who remain.”

Yulia Alekseeva, a mother of a two-month-old, said she is struggling to find diapers and other baby products. “There are catastrophically few in the city. We also have a grandmother with dementia who needs diapers and medicines on an ongoing basis, which are also not available,” she told CNN.

“We are in hiding. There is a curfew in the city, if people go out after eight in the evening, they shoot to kill.”

Like most of the city’s residents, Alekseeva has hunkered down with her family, leaving her house only to search for basic necessities.

“We are in hiding. There is a curfew in the city, if people go out after eight in the evening, they shoot to kill. You can move in the company of no more than two people,” she said.

But she remains defiant, adding: “The Ukrainian flag is still over Kherson, the city did not surrender to the invaders. The military said not to provoke them and everyone would be alive.”

On Saturday, a large crowd of protesters took to the occupied streets of Kherson, waving Ukrainian flags and coming face-to-face with Russian forces. The troops appeared to fire live bullets in the air to disperse the crowds, social media video showed.

From her apartment in Kherson where she cares for her grandmother, Svetlana Zorina told CNN she would stay in the city “for as long as the Ukrainian flag stands and the mayor is Ukrainian.” On Friday, she went to the grocery store only to find empty shelves, and then headed to the apartment of her mother, who is abroad, where she collected pasta and rice.

“We are, here, very afraid that we will become part of Russia. We don’t want history to repeat like with Crimea,” she said, referring to Russia’s annexation of the Ukrainian peninsula in 2014. “We’re less afraid to be under bombs than to become a part of Russia.”

It’s something Abba is convinced won’t happen in his city. Though he is consumed with fears of Russian annexation, he argued that in contrast to Crimea, which fell relatively bloodlessly, Kherson has put up a stiff resistance to occupation.

“The Russians have crossed a line multiple times,” he said. “There cannot be [another] Crimea.”