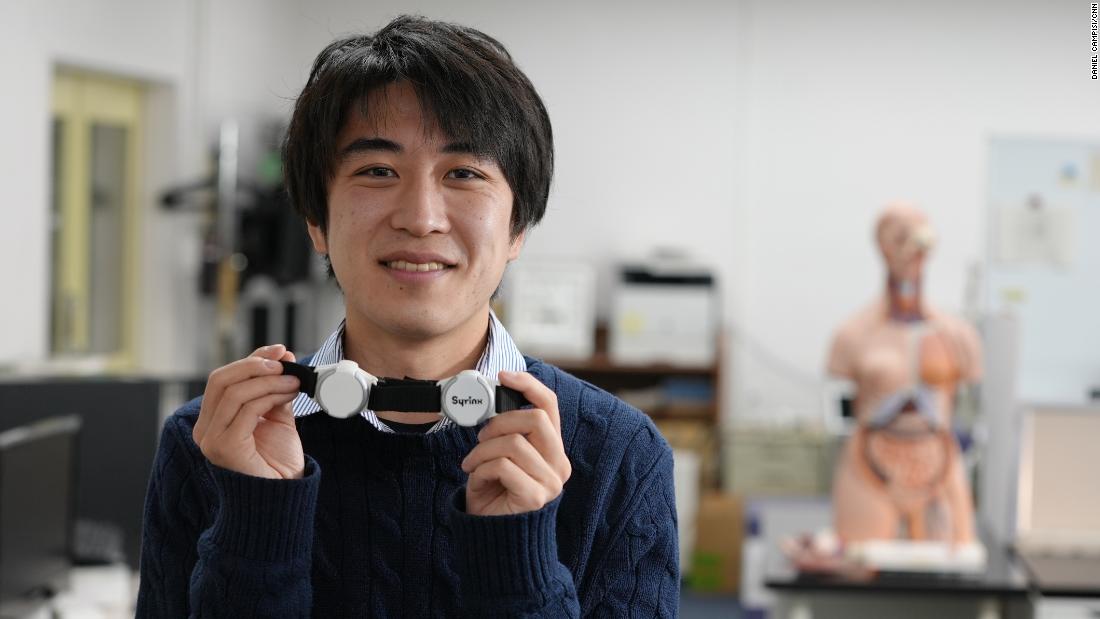 “I got cervical esophageal cancer and lost my voice about 10 years ago and made a smooth recovery,” Ogitsu said. “But I had a recurrence almost two years ago and ended up being unable to speak without a device.”

Ogitsu had a laryngectomy, a surgery in which all or part of the larynx — also known as the voice box — is removed. This procedure can be a part of treating laryngeal cancers, which impact more than 184,000 people worldwide each year, according to the World Health Organization.

These days, Ogitsu volunteers his time at Ginreikai, a laryngectomy support group in Tokyo, Japan, where he helps people learn to speak again using a speech device called the electrolarynx.

The traditional electrolarynx is a razor-sized device that is held up against the neck and creates vibrations that in turn transmit sound through tongue and lip movement.

But there have not been many improvements in sound quality and functionality since it was invented over 100 years ago.

After speaking with the members of Ginreikai about their struggles, Masaki Takeuchi, a young engineer, decided to create something new and better.

In 2019, Takeuchi and a group of graduate students from the University of Tokyo developed Syrinx — a machine-learning, hands-free, wearable electrolarynx.

“The patients said that they want to talk in public without any inconvenience or embarrassment,” Takeuchi told CNN. “This project was launched to develop a good device to make that happen.”

For patients who lose their ability to speak after a laryngectomy, there are currently three speech rehabilitation options, according to Yvonne Knapp, a speech-language pathologist at Weill Cornell Medicine in New York City.

There’s the traditional electrolarynx, which is what Ogitsu currently uses. Another option is esophageal speech, says Knapp — a learned technique where air is swallowed into the esophagus and forced back up, creating vibrations on the throat which are then formed into speech. This is the oldest and hardest of the voice restoration options, Knapp says, adding that less than 40% of patients can achieve it, and only 5% can do it well.

The third form of speech rehabilitation, and the most popular according to Knapp, is the tracheoesophageal puncture, or TEP. This surgical procedure creates a small hole between the trachea and esophagus, where a prosthesis can be inserted to allow air from your lungs to vibrate muscles in your throat to create speech.

Knapp, who has worked with laryngectomized people for 26 years, says TEP is much easier than esophageal speech and “is far superior in sound quality to the electrolarynx.”

However, not every patient is able to get the TEP procedure. And for those who can’t — external speech aids like the electrolarynx can present as a good option for voice restoration. But the devices can produce speech that sounds monotone and unnatural, and they can be hard to use. Ogitsu also pointed out that he can’t use both hands freely with the traditional electrolarynx.

“The problem with the electrolarynx is it’s very robotic,” Knapp says. “People don’t like it and they tend to shove it in a drawer and never use it again.”

The main difference between the traditional electrolarynx and Syrinx is the way Takeuchi’s device creates sound.

“Conventional devices use pulse waves, which can produce a loud sound, but be far from a human voice — more robotic and mechanical. So, we used human recordings and processed them to create sounds more like a human voice,” he said.

These two components combined can create a more natural sounding voice, according to Takeuchi, but the device is still in the early prototype phase and the technology is always evolving.

“We used (artificial intelligence) only in the early days, but now we don’t,” he said. “In the near future, we would like to introduce AI again to create sounds much more like human voices.”

Takeuchi says the device can also incorporate a user’s old voice recordings, if they have any, to sound even more like their former voice — an important option for many patients.

Our voices are so closely connected to our identity, Knapp said.

“[Say someone calls] you and you don’t know who’s on the other end, but that person says one syllable and you know who it is, and you know how they’re feeling from one syllable,” she said. “That’s what a voice can impart, and that’s super powerful … When they’re robbed of that, it is really, really hard.”

As part of the research and development of the device, Syrinx is continually tested by the Ginreikai members.

Takashi Sugiyama, a 75-year-old pharyngeal cancer survivor, has tested the devices about seven times. He said that it still sounds too mechanical but that progress has been made over time. During his most recent testing, he says that the sound is clearer and that it’s very easy and comfortable to wear.

Ogitsu, who tests the device about once a month, says he would like Syrinx’s straps to be more elastic to fit better around his throat.

While Knapp has not seen the device in use in person, she said that it may have a bit more depth than a traditional electrolarynx but that it doesn’t sound too different than what’s currently on the market.

But she added that the hands-free feature could be a game-changer for some patients.

The device is already gaining recognition in Asia, with Syrinx winning the 2021 Grand Prix at the Japan Healthcare Business Contest and the Microsoft Imagine Cup Asia Regional in 2020. Eventually, Takeuchi would love to expand his product globally and have US testers.

For now, he says he’s working on reflecting the feedback he’s getting from Ginreikai into future iterations of the device.

“I am so glad to hear that people were surprised by this device and said, ‘I can’t wait to talk with this device’ and ‘I hope it will be commercialized soon,'” said Takeuchi, adding that he hopes to pass the strict screening criteria required for clinical trials and get Syrinx to market in the next decade.

Ogitsu agrees he’d like to see this device fully developed and available as soon as possible.

“I strongly feel how grateful I am to use my own voice for communication and how important communication is for human beings and society,” he said. “I believe that we will be able to lead a more normal social life by using both hands while speaking like a healthy person.”