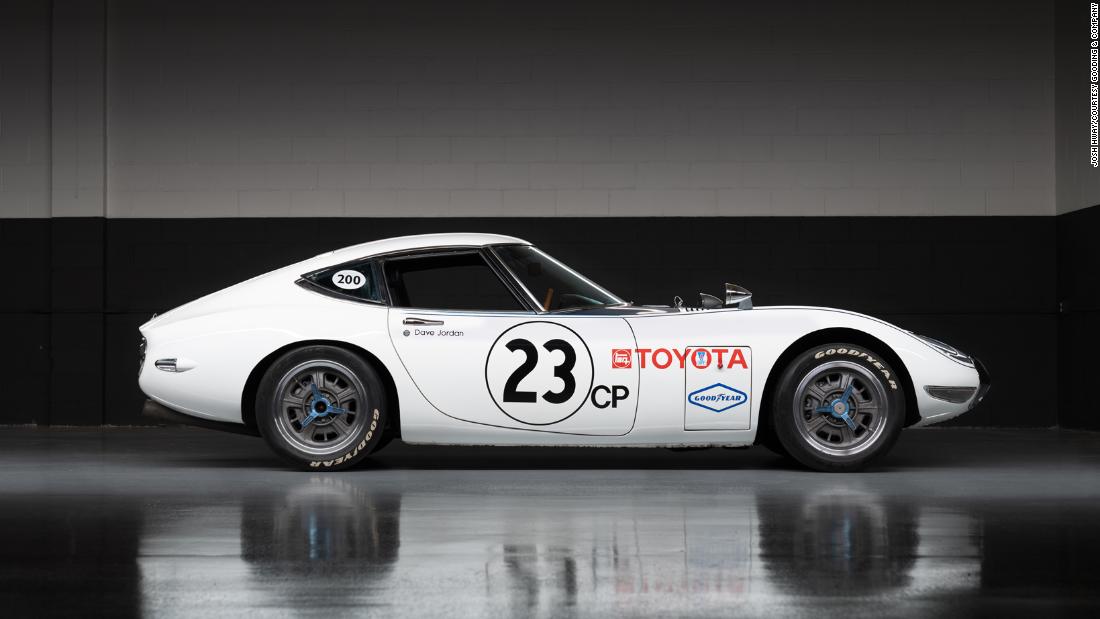 This particular Toyota was, genuinely, the rarest of the rare. It was a Toyota 2000GT, a model produced from 1967 to 1971. Only 351 were ever made. But this one is more than just a Toyota. It has another name attached as well, making it a 1967 Toyota-Shelby 2000GT. Astute observers of automotive history might remember the name “Shelby” as that of the world-famous racing driver and manufacturer Carroll Shelby.

Originally, it was painted red and was used as a demonstration car in the United States, allowing Toyota to show off the product to prospective American customers. After a while, it, along with two other 2000GTs, was given to Shelby so he could turn them into competitive racing cars. The plan was to give the 2000GT some real racetrack pedigree for marketing purposes.

This history is why, while other Toyota 2000GTs can be worth over $1 million, making them among the world’s most valuable Japanese cars, this was worth three times more. This price makes this vehicle the most valuable Japanese car ever sold at auction. It was sold at Gooding & Co.’s Amelia Island collector car auction. The final selling price includes a roughly 10% fee paid to the auction company.

By the late 1960s, Toyota was known as a provider of cheap transportation for those willing to take a chance on a car from Japan. Wanting to change that image, Toyota had its designer Satoru Nozaki come up with the 2000GT, a sports car that looked far more like a Ferrari than a Toyota Crown or Corona, cars Toyota was known for at the time.

It wasn’t Toyota’s first sports car. The cute 44-horsepower Sports 800 came out just a couple of years before. But the 2000GT was on an entirely different level. With a starting price over $7,000, the equivalent of about $60,000 today, the 2000GT cost more than a Porsche 911 or Jaguar XKE at the time. It was far more than any other Toyota model.

For the money, buyers got real performance. The 2000GT’s six-cylinder engine, created with assistance from Yamaha, could put out as much as 150 horsepower and take the car from zero to 60 miles an hour in 10 seconds. Its acceleration could easily be beaten by a modern family hauler, like a Toyota Highlander Hybrid SUV, but the 2000GT’s speed was respectable, if not amazing, in its time.

One of the reasons the 2000GT may not have been as popular in back in the 1960s as Toyota had hoped — the company had planned to make as many as 1,000 a year, according to Gooding — was that it just wasn’t quite as fast as its European competitors, said John Wiley, a collector car value analyst with Hagerty Automotive Intelligence. Still, it was the first truly “world class” Japanese sports car, he said.

The real problem was simply the cost, though, according to Gooding. Toyota was losing too much money on each one for production to continue.

Toyota declined to comment on the reasons behind the long ago decision to stop making the car. Ben Hsu, author of the book “Classic Japanese Performance Cars,” cited both manufacturing cost and the lack of demand. Toyota had reached farther, in price and prestige, than customers were willing to go.

“When you get to that level, people are buying for status, and the badge matters,” he said.

The 2000GT’s interior was finished in the same wood used for Yamaha grand pianos, according Hsu’s book. With its wooden rim and three thin spokes, the 2000GT’s steering wheel looked like it belonged in an expensive Italian or British sports car. A Toyota 2000GT was even featured in a James Bond movie, 1967’s “You Only Live Twice.” The car in that movie was a roofless “convertible” version because Sean Connery, the actor who played Bond, was too tall to fit in it otherwise. (The 2000GT was never made in convertible form as a production car.) That James Bond connection has also added to the car’s collectible value, said Wiley.

Shelby made numerous changes to prepare the 2000GT for racing. Among other things, the rosewood dashboard was replaced with texture-painted metal, and adjustable KONI shock absorbers were added, as was a roll bar for safety. The engine’s horsepower output was increased to 210. He also had the car repainted in white and a shiny blue. This particular car was used as a development model by Shelby and kept as an alternate in case one of the other two wasn’t able to race. By the end of the 1968 racing season, Shelby’s Toyotas finished fourth in their racing series behind cars from Porsche and Triumph, according to Gooding.

One of the other Toyota-Shelby 2000GTs is in the Toyota Automobile Museum in Japan but it has been repainted and no longer looks like this one, according to Gooding. The other is in a private car collection somewhere in the United States.

The only other Japanese car with values close to the Toyota 2000GT is the much newer Lexus LFA, a car that could be considered a modern equivalent. An exotic car produced by Toyota’s luxury division from 2010 to 2012, the LFA also had an engine produced in collaboration with Yamaha, in this case a V10. Only 500 were made with prices starting at $375,000. As with the 2000GT, Toyota had a hard time selling them all during their production run, said Hsu, but prices rocketed up after the production run ended.