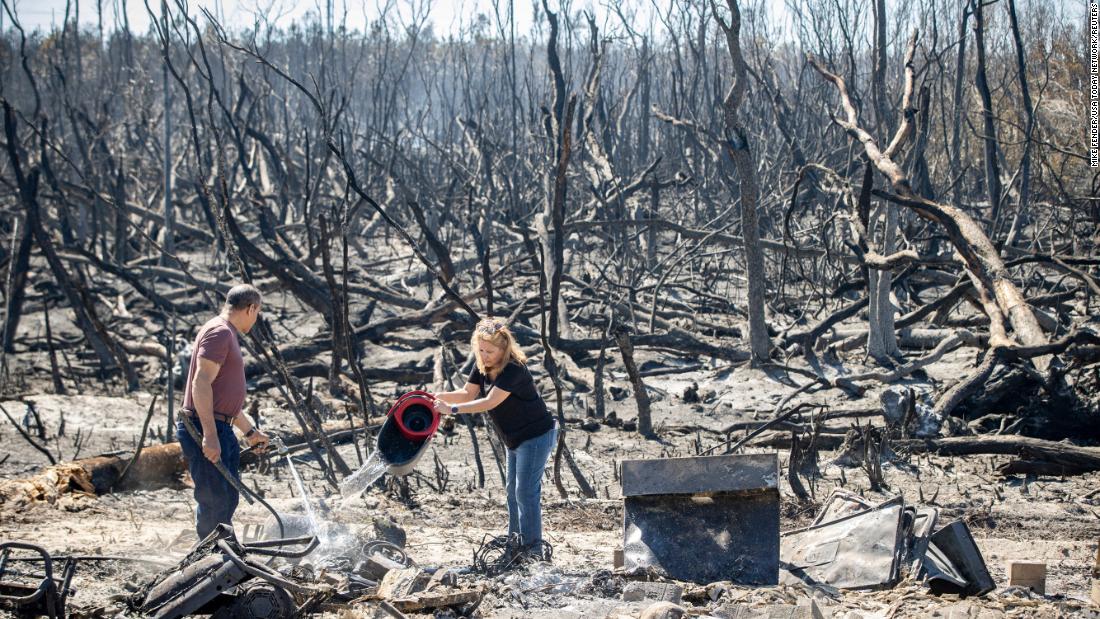 The most prominent blaze, the Bertha Swamp Road Fire, expanded over the weekend and remains a threat, according to Gov. Ron DeSantis.

“The Bertha Swamp (Road) Fire is approximately 9,000 acres and is about 10% contained, and so as you go out and look at that, you know that’s a big boy, and it’s raging very quickly,” DeSantis said Sunday. “Today is the perfect day for these types of fires to move, unfortunately. You have very dry conditions and you have a lot of wind.”

The fire, which originated in Gulf County, has spread into neighboring Bay and Calhoun counties just east of Panama City, according to the Florida Department of Agriculture and Consumer Services.
DeSantis expanded a state of emergency Saturday to include all three counties.

“Right now, the main focus is, of course, is getting the fire contained, but we are marshaling assets and we will provide whatever the folks here in northwest Florida (need),” DeSantis said Saturday.

There is no timeline as to when residents will be allowed to return home, according to a release from the Florida Forest Service.

Another fire even closer to Panama City, the Adkins Avenue fire in Bay County, was 35% contained as of Sunday, FFS said. Two homes have been destroyed and 12 more were damaged.
Authorities noted fuel in the form of dead trees on the ground and leftover debris from 2018’s Hurricane Michael, along with low humidity and strong winds, contributed to the fire’s intensity.

“The blowdown timber from Michael makes it very difficult to fight wildfires in our area,” Bay County Emergency Services said in a statement. “Fires that would normally be contained quickly grow rapidly as there is so much fuel on the ground.”

Additional resources have been brought to the area to combat the fires, DeSantis said, noting some first responders had suffered injuries.

“We’ve got four National Guard air assets: two Black Hawks and two Chinooks. They are working, and they have a positive impact,” DeSantis said. Crews have dropped more than 103,000 gallons of water on the Atkins Avenue fire since Friday, officials said.

Ford also said the Bay County Jail is “not in immediate danger, but we do have a very robust plan in place” and will have buses on “standby should that (evacuation) become necessary.”

Bay County Emergency Services said Sunday that an additional fire in the area sprouted, with it being approximately 200 acres and 10% contained. Evacuations of an area nursing home were under way, the agency said.

“The Bertha Swamp Fire is now 9,000 acres,” Monroe said Sunday. “It is just hard to believe that something could be that big. If you fly around it, it is just incredible. it is hard to comprehend just how big, strong and fierce this fire is, and the winds have been variable throughout the last few days. We expect that again tomorrow.”

Investigators are working to determine the cause of the fire and a burn ban has been issued for Bay County. There are currently 168 wildfires burning 15,300 acres throughout Florida as of Sunday, FFS said.