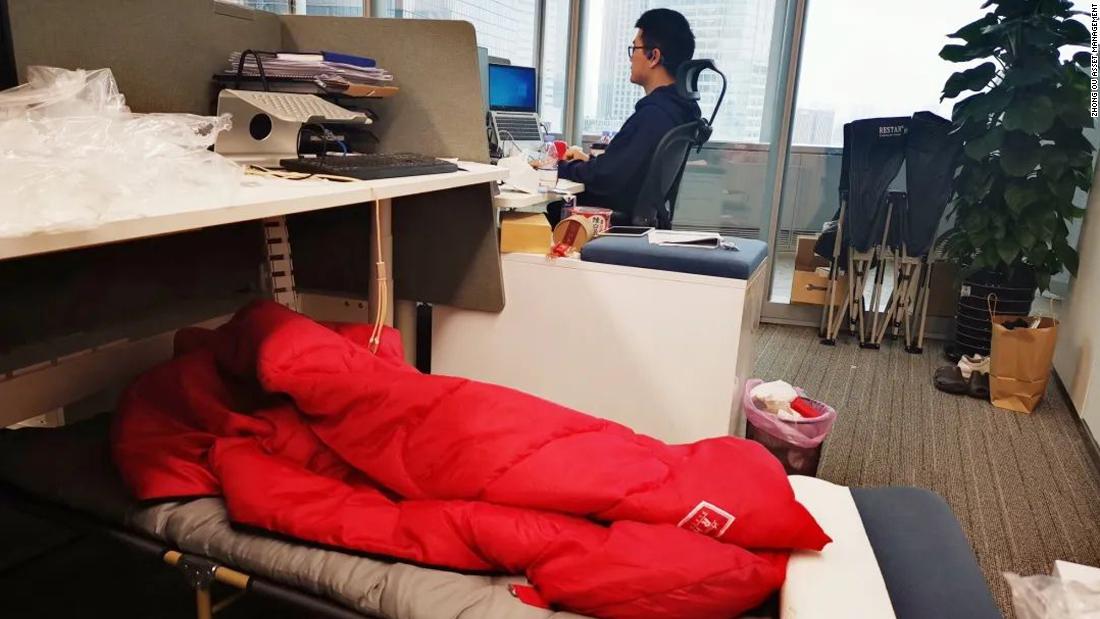 A person familiar with the matter told CNN Business that traders and fund managers were being offered between 500 and 2,000 yuan ($78 to $314) per night to camp out at work, with some companies placing folding beds under workers’ desks. Other firms have also provided staff with sleeping bags, food and toiletries to get by.

Much of Pudong “is doing it,” the source added, referring to Shanghai’s financial district, which is home to more than 1,000 financial institutions, and China’s leading stock exchange — which is continuing to operate as normal.
Zhong Ou Asset Management, a Chinese firm that says it has $98 billion in assets under management, said that several of its investment directors and fund managers had begun staying overnight earlier this month to ensure operations continued as the pandemic “began to escalate” in Shanghai.
One executive, who is designated the “onsite chief,” has been “stationed in the office for more than half a month,” the company said in a post on Chinese social network WeChat on Monday.

Another firm, Foresight Fund, also said some of its staffers had been staying at the office since March 16.

“Weekends are no exception. They bring daily necessities and call the company home,” it said in a post on WeChat, featuring photos of a well-stocked pantry and camping beds set up beside workers’ desks.
Shanghai has emerged as the new epicenter of China’s worst Covid-19 outbreak in two years, reporting more than 25,000 cases since March 1.

Officials kicked off a staggered lockdown on Monday, with about 11 million people in the eastern half of the city — which includes Pudong — told to stay indoors for four days. The western half, which houses about 14 million residents, will start restrictions on Friday.

During the pandemic, workers in China have become familiar with the concept of living in the office.

Earlier this month, Chinese state-run news outlet china.com.cn posted a video diary showing workers spending several nights in an office in Shanghai. While the video did not identify the company, it said that 75 workers were living in 3,230 square feet of space.

In the footage, posted on Chinese social platform Weixin earlier this month, employees slept on air mattresses scattered around the office. One man washed his face in the bathroom sink.

Showers were “a problem,” one worker said in the video, adding that the team initially had to boil hot water to wash up before a shower facility was eventually installed.

“It feels like going back to the dorms at university.”

When it came time to sleep, they faced other problems. The employee in the video complained that the marble floor was hard and uncomfortable, even with sleeping bags.

Some colleagues also snored, so “we decided to send them to a meeting room,” she added. “So they sleep together in that room.”

The video did not specify why the workers were in lockdown prior to the citywide restrictions.

But China has a practice of imposing “snap” lockdowns across the country, sometimes shutting down entire office buildings with people still inside, even if just a single Covid-19 case is detected. Those workers are often also provided bedding and other necessities.
Last year, Shanghai Disneyland became a prominent example of such stringent measures, with tens of thousands of visitors and staff forced to undergo coronavirus testing after authorities said that one visitor had tested positive.

Despite the latest clampdown, businesses in Shanghai are not deterred.

This week, the Shanghai Stock Exchange said it would offer online services for companies to continue to hold listing ceremonies, roadshows and shareholder meetings. It will also relax some requirements for the submission of documents.

The priority is to keep the “business running,” Zhong Ou Asset Management said in its post Monday.