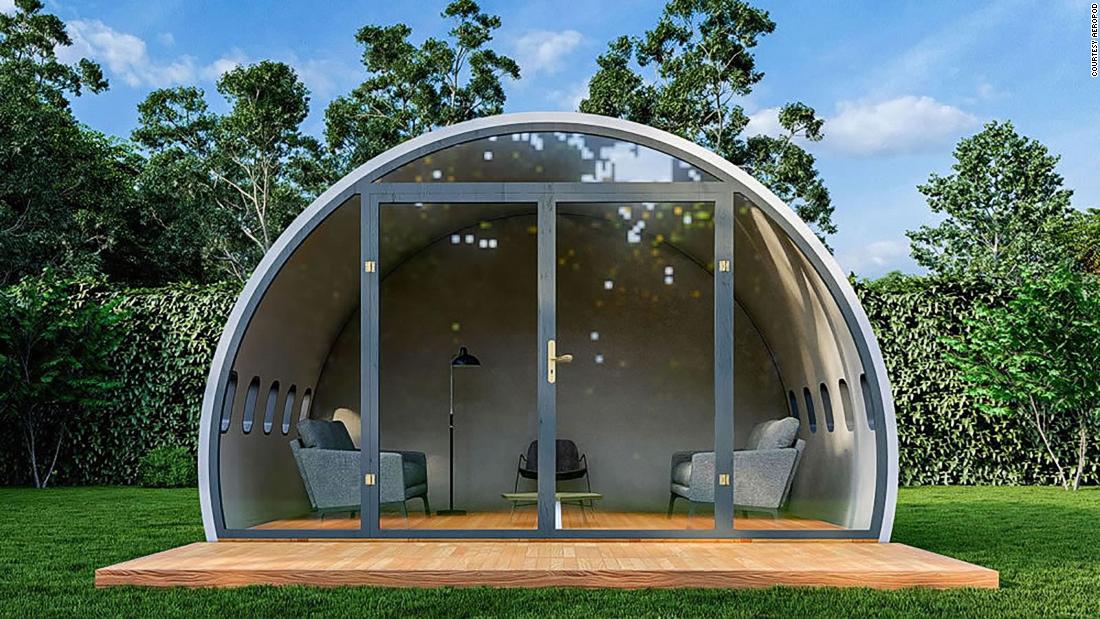 (CNN) — “We really didn’t intend selling them,” says Kevin Regan over the phone from the northwest of Ireland.

Converting a slice of airplane into a sleek and durable home office had been a personal project in 2021, but after his sister-in-law put photos of the cabin on social media, requests rolled in and things started to snowball.

Now, Regan and his business partner Shane Thornton — both builders by trade — have started their own company named Aeropod, recycling commercial airplanes into home offices, glamping pods and ready-made accommodation.

They’ve only spent €100 (about $110) so far on advertising (the company’s still “brand new out of the wrapper!,” says Regan) but they’ve already sold 11 pods and are preparing to have more shipped to wherever clients want them.

Airplanes are built to last. Strong, thickly insulated, and made of sturdy aluminum alloys. And with some 15,000 aircraft estimated to be due for retirement in the next 20 years, there’s a steady supply of them available for dismantling and recycling.

“They were end-of-life, and they were flown in, and then every part was broken up and sold all over the world,” says Regan.

The first plane they worked with was an IndiGo airline Airbus A320 sourced via Cardiff Airport in Wales. The initial pod took four months of fine-tuning to get it to the refined design they were looking for.

The pods are available in customized sizes, ranging from a dinky three-window to a spacious 10-window with a bedroom, en suite and kitchenette.

The overhead storage cabins are removed, but the window blinds still pull down as before and “everything else including the floor is the original aeroplane,” says Regan.

Internal walls and floors are fully insulated and the rooms can be kitted out with USB sockets, LED lighting and heaters. The glass doors — specially designed to fit an A320 — are double-glazed and insulated for year-round use.

“We can deliver it and it’s ready to go, once you have a concrete base in,” says Regan. “Your office is live.” The pods are pre-made and have a built-in lifting system, so that if you move, the pod can move too.

He points to the benefits of recycled plane pods as being long-lasting, self-contained units. “It’s just as good as a house,” he says. “There’s no maintenance, just washing — same as your car. Some customers are going to wrap them, like you’d wrap your car, but there’s no need to. The painting is perfect.”

Prices start at around €20,000 and go up to about €37,000 for the most deluxe customizations. It’s early days for Aeropod, but they hope to perhaps expand operations to England and are open to commissions from wherever. Says Regan, “We can deliver these anywhere. There is no limitation to where we can take them.”

Aeropod aren’t the only company operating in the recycled airplane space. A decommissioned British Airways jet has been reborn as a $1,300 per hour “party plane” for hire at England’s Cotswold Airport.

Cotswold Airport is where Welsh company Aerfin carry out disassembly operations on end-of-life planes. Up to 90% of a discontinued plane can be reused or recycled. Last year, its operations director Simon Bayliss talked CNN through the process.

A nose-to-tail approach to leftovers doesn’t just belong in the kitchen.