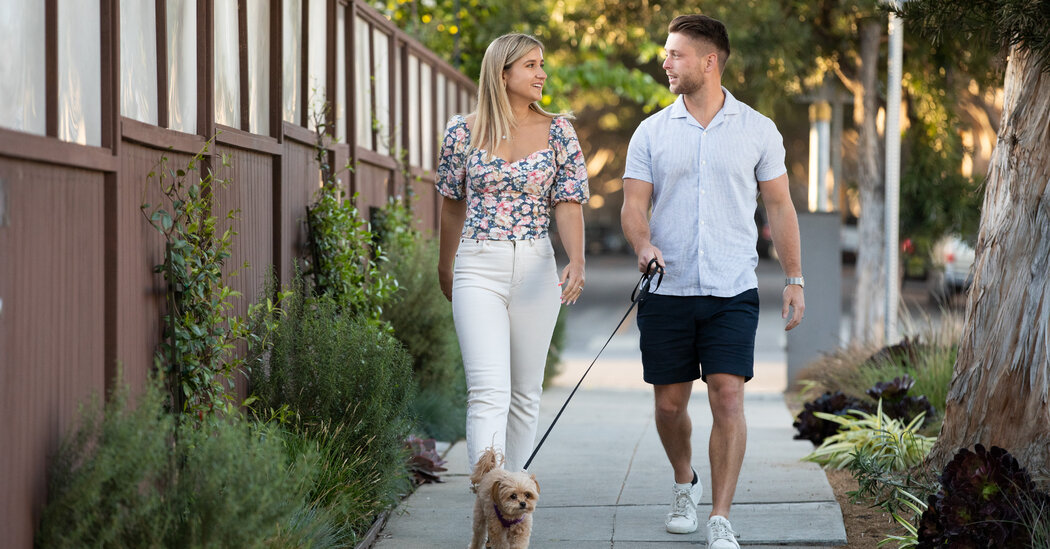 When Merrill and Zak Leedom lived in Columbus, Ohio, Mr. Leedom thought their one-bedroom apartment, at $2,100 a month, was so expensive it was “absurd,” even if it came with a rooftop pool, a gym and a dog park. But that was before the couple moved to Los Angeles last year and started looking for a place to rent there.

Mr. Leedom, 28, had been flying back and forth from Columbus after the wealth-management firm he works for was acquired by a company based in Southern California. Ms. Leedom’s job as a communications strategist, primarily for health care companies, was hybrid, so she was able to shift to remote work.

“I love the sun and being out in the fresh air,” said Ms. Leedom, 27. “It’s really hard to do that for many months of the year in the Midwest, especially during Covid, when things weren’t open and it was gray and cold and snowy.”

The couple, who met as undergraduates at West Virginia University (he was on the soccer team, she was a cheerleader), were married in 2019. Last September, after heading to Los Angeles, they spent three months in short-term Airbnb rentals in various Westside neighborhoods to get a feel for where they wanted to be. Mr. Leedom’s office is in Thousand Oaks, in Ventura County, but he often drives to meet with clients as far south as Orange County.

[Did you recently buy or rent a home in California? We want to hear from you. Email: thehuntca@nytimes.com.]

They started their hunt in the San Fernando Valley, which would have made for a short commute. But they decided that living near the ocean was the best way to enjoy the Southern California lifestyle. They settled on Santa Monica, Venice and Marina del Rey, beach-y areas between Mr. Leedom’s office to the north and frequent client meetings in Orange County.

In the absence of local friends or a rental agent to help, Ms. Leedom scoured the internet for new listings. The couple, who have a dog named Reese, loved the amenities in their Ohio complex and hoped to find similar ones in Los Angeles. But it didn’t take long to realize that their budget of $3,000 a month wouldn’t be enough for a two-bedroom with modern appliances and updates, so they expanded the budget and considered some one-bedrooms.

The areas they searched were among the priciest in the region: The average monthly rent for a one-bedroom is $5,046 in Santa Monica and $4,530 in Marina del Rey, according to ApartmentList.com. “It was a bit of a price shock,” Mr. Leedom said.

A priority for Ms. Leedom was finding a place that was walkable, because the couple share one car, which her husband uses to commute to work most days. “I don’t want to feel like I’m isolated,” she said. “And L.A. is very much a driving city.”