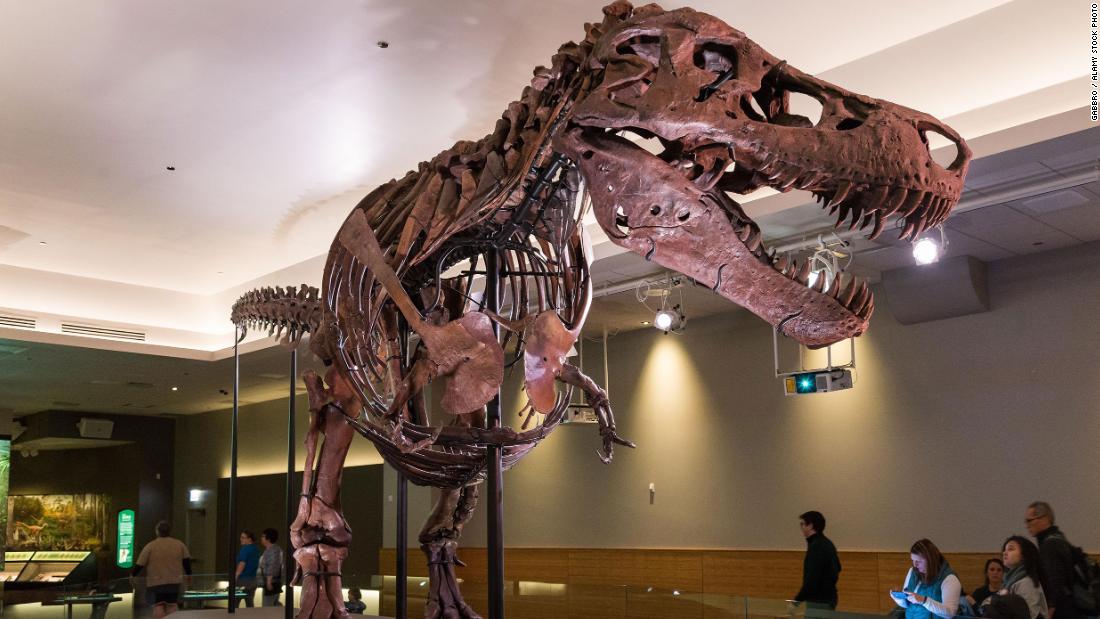 A new analysis of the bones and teeth of 37 T. rex specimens suggests that the dinosaur might need to be regrouped into three separate species — with the fearsome predator that lived 90 million to 66 million years ago potentially getting two sibling species: tyrant lizard queen and tyrant lizard emperor.

The study, published in the journal Evolutionary Biology, said it had long been recognized that the “stoutness” of adult Tyrannosaur skeletons varied considerably. This had been explained by sex differences — with female T. rex perhaps more petite than their male counterparts. Alternatively, it could be explained by developmental stages, or simply individual variation in traits.

Other differences include its banana-size teeth — some T. rex jaws have a single D-shaped incisor that is substantially smaller than the next tooth, while others have two of these smaller D-shaped teeth.

The researchers compared the length and circumference of the femur, or thigh bone, of 24 T. rex specimens. They also measured the base of the teeth or space in the jaw to understand if 12 of the dinosaurs had one or two slender incisor teeth. The study team’s conclusion was that T. rex was not a single, unchanging dinosaur but may have had two equally terrifying sibling species.

“All three species were 6-7 tonnes with similar skulls and bodies. It would be like the difference between being attacked by a lion or tiger. Not much,” said study author Gregory Paul, the author of “The Princeton Field Guide to Dinosaurs.”

The differences were “subtle,” similar to how “skeletons of lion (Panthera leo) and tiger (Panthera tigris) are hard to tell apart even among experts,” he said.

However, other paleontologists disagreed with the findings.

“I understand the temptation to divide T. rex into different species, because there is some variation in the fossil bones that we have. But ultimately, to me, this variation is very minor and not indicative of meaningful biological separation of distinct species that can be defined based on clear, explicit, consistent differences,” said Steve Brusatte, professor and Personal Chair of Palaeontology and Evolution at the University of Edinburgh’s School of Geosciences, via email.

“Dividing T. rex into three species based on measurements from 38 bones just isn’t a strong enough case for me.”

Thomas Carr, an associate professor of biology and director of the Carthage Institute of Paleontology at Carthage College in Kenosha, Wisconsin, said the features identified by the researchers “represent meaningless variation, not biological signal.” A study he conducted on variation in T. rex skeletons published in 2020 did not reveal different species.

The study authors said the more robust Tyrannosaurs in their sample outnumbered the “gracile” or slender ones 2 to 1, and such a large disparity could not be explained by the small sample size, nor could it be a sex-based difference, which would result in a more even split.

The variation in leg bones was also unrelated to developmental stages, they added, because the more robust femurs were found in some juvenile dinosaurs two-thirds the size of an adult, while the slender leg bones were also found in some full adult-size specimens.

When it came to teeth structure, specimens with one incisor tooth were correlated with often having more slender leg bones — although they only had leg bone measurements for 12 dinosaurs.

While the authors conceded that the data “do not meet the ideal proof” of three separate species, they said their study indicated there were three recognizable “morphotypes” within the Tyrannosaurs they studied.

“The full expectation is that these new taxa will be tested and, if necessary, accordingly revised as additional specimens and analysis come to light,” the study said.

Placing animals that went extinct tens of millions of years ago into strictly defined categories is inevitably challenging, but the authors said they hoped their work would frame and focus future research. But Brusatte at the University of Edinburgh said he was unconvinced.

“Fundamentally this comes down to the age-old debate about lumping vs. splitting when classifying species. It’s hard to define a species, even for animals today, and these fossils have no genetic evidence that can test whether there were truly separate populations.

“Until I see much stronger evidence, these are all still T. rex to me, and that’s what I’ll be calling them.”