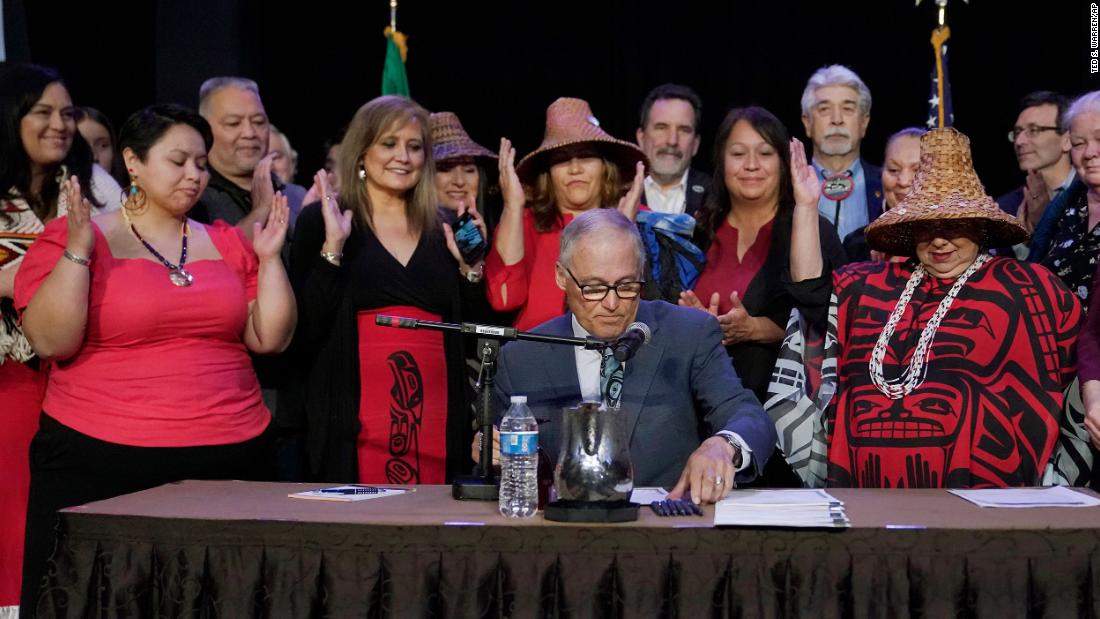 The bill, which was passed unanimously in both the House and the Senate, highlights that “indigenous people experience disproportionate rates of violence in Washington state,” and calls for the creation of an advisory system, like the AMBER Alert system.
“Compared to the rest of the state’s population, indigenous women comprise a disproportionate number of missing people,” Inslee said during a signing ceremony. “In cases where an individual has died, this bill will help families recover the remains of their loved ones while also honoring and respecting indigenous cultural practices. For women who are found, this bill will provide treatment so that they can start to recover from the trauma of their experience.”

Inslee signed the bill, along with several other tribal-related bills, at the Tulalip Resort Casino.

Democratic Rep. Debra Lekanoff, a sponsor of the bill, spoke during the ceremony and said missing and murdered indigenous women and people “is not just an Indian issue, it’s not just an Indian responsibility. Our sisters, our aunties, our grandmothers are going missing every day.”

The bill “removes the hand so we can hear the unheard screams, it removes the hand from the Washington State Patrol. It brings together all of our governing bodies to collaborate, to take care (of) those who have been taken, those who’ve been lost, and those yet to come,” Lekanoff said.

For years, families and activists have demanded that authorities direct more attention and resources to cases involving missing and murdered Indigenous women, arguing their cases are often overlooked or dismissed.

Federal and state officials have recently publicly acknowledged that there is a crisis of violence against Native Americans, and have launched efforts to address it, but advocates say their response is not enough.