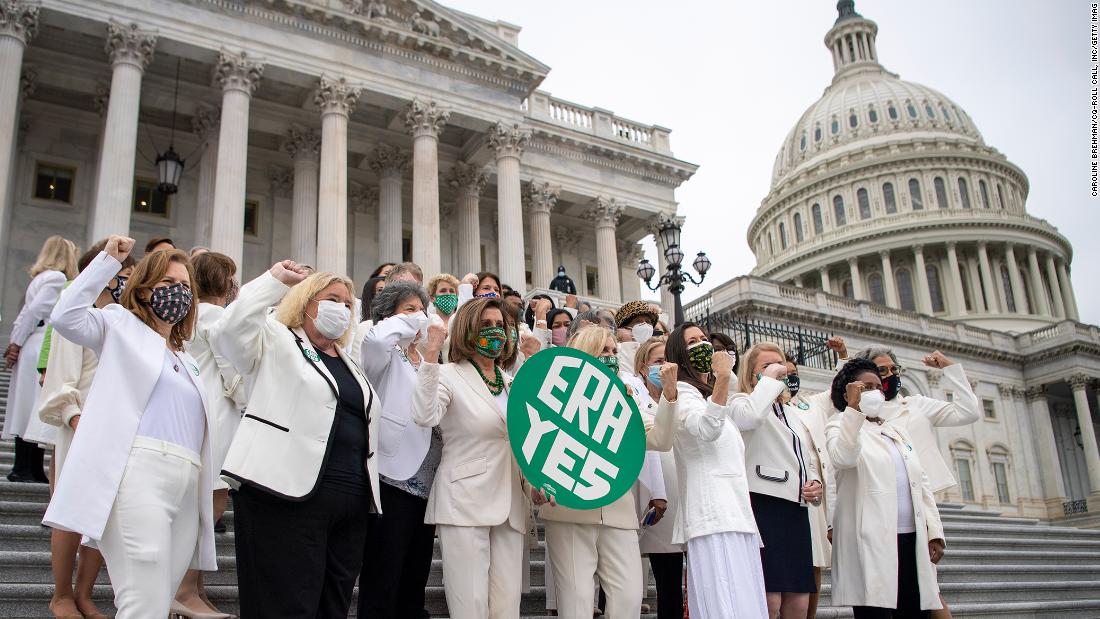 Backers of the ERA say it went into effect as of January 27, having met all the constitutional requirements, and should be published as the 28th Amendment.

Opponents — and even some legal experts who support the ERA — say the amendment is dead and has not been validly ratified, pointing to a deadline that passed, state rescissions, prior court decisions and Justice Department legal opinion.

While part of the contention over the ERA is about unresolved constitutional questions, it has also been hotly debated for what it could — and couldn’t — do for women in America, with the arguments evolving over time especially since the second-wave feminist movement. The ERA has long been just as controversial as the issues it could affect, including abortion.

Putting aside the unresolved constitutional questions about the ERA, it’s worth examining what the amendment is and what it would do — though that too is debated.

Section 1: Equality of rights under the law shall not be denied or abridged by the United States or by any state on account of sex.

Section 2: The Congress shall have the power to enforce, by appropriate legislation, the provisions of this article.

Section 3: This amendment shall take effect two years after the date of ratification.

The text of the amendment is simple, but what it may do when applied is broad.

Supporters say the ERA would ban discrimination on the basis of sex and guarantee equality for all under the Constitution, and, in addition to being symbolic, will provide a “key tool in the legal arsenal” to combat discrimination.

Enshrining those protections into the Constitution, advocates say, makes it more difficult to change and will protect against any potential attempts to roll back existing gender equality rights.

The ERA is necessary, because the Fourteenth Amendment’s Equal Protection Clause has “not been sufficient” in being protective of the rights of women and others, said Columbia Law professor Katherine Franke, who is the faculty director of the ERA Project, the school’s policy think tank on the ERA.

Since the ERA would be freestanding, “it’s not tied in any way to the status quo version of equality, and in that sense, it should cover forms of discrimination that may be unintentional but quite potent,” Franke told CNN.

A prevailing reason the ERA is so polarizing centers around abortion, and how the ERA would protect abortion rights.

As the US Supreme Court’s decision looms in a case that could result in Roe v Wade being overturned, Democratic Rep. Carolyn Maloney of New York, a longtime ERA advocate, said that it “makes the ERA even more urgent.”

“Up until now, I thought that the right to choose was a solidly established constitutional right. But shockingly that is no longer the case. Abortion access is on the chopping block. It is not possible to have a true democracy without control over our own bodies,” Maloney said during a virtual press call held by the ERA Coalition last month.

Virginia state Sen. Jennifer McClellan, who helped lead Virginia’s ratification of the ERA in 2020, said in a US House hearing last year that “as we have seen states begin to threaten access to abortion, the ERA can help.”

If the ERA were implemented, lawsuits could be filed challenging a state’s ban on abortion, arguing that it’s a form of sex discrimination under the Constitution.

Some states already have a version of the ERA in their state constitutions and have had the ERA interpreted to strike down bans on using Medicaid funds for abortion, including in Connecticut and New Mexico.

Opponents have sought to label the ERA the “Everything Related to Abortion Act” and say the amendment is nothing more than a “trojan horse” for taxpayer-funded abortion.

National Right to Life, an anti-abortion group that opposes the ERA, said that advocates would use the amendment as a “legal weapon to invalidate virtually all state and federal limits on abortion, and to require funding of elective abortion at all levels of government.”

The group has pushed for language to be added to the ERA that would state, “Nothing in this Article shall be construed to grant, secure, or deny any right relating to abortion or the funding thereof,” to no avail.

Supporters of the ERA have more openly recognized that the amendment would prohibit discrimination in access to health care including abortion and say that the ERA would address other important aspects of reproductive health.

“Abortion is healthcare and the ERA is about gender equality in access to healthcare, and the workplace, and in school and every aspect of federal and state law and policy,” McClellan testified before the House Oversight Committee. “And in particular, Black women have been disproportionally discriminated (against) on the basis of pregnancy, and the ERA would also help with that.”

The importance of Section Two

Supporters and opponents have raised the importance of Section Two of the ERA, which gives Congress the “power to enforce” the amendment. Both sides have pointed to this part of the amendment as to what will allow the advancement of legislation, such as equal pay.

Some opponents argue that the ERA won’t give women more rights than they currently have, but that it is actually harmful to women.

“Let us be clear, laws protecting women’s interests will be undercut by the radical language of the ERA that strips away from women their unique place in the law,” several conservative groups, including Students for Life for America, Concerned Women for America, the Family Policy Council, wrote in a letter to Congress in 2020, adding that the ERA’s “vague language” on sex may “harm women’s unique interests.”

They argue laws that were designed to help women would be impacted, such as the 1972 Equal Employment Opportunity Act, the 1974 Minimum Wage Act and the 1964 Pregnancy Nondiscrimination Act.

The conservative group Eagle Forum, founded by Phyllis Schlafly who fought against the ERA in the ’70s, argues that the ERA would overturn laws that provide special accommodations for pregnant women, end government programs that support women as mothers, and eliminate Social Security benefits for stay-at-home mothers based on their spouse’s income.

The group also says that it would strip women of “important rights and protections, like exemption from military draft, and the right to sex-segregated private spaces like bathrooms and locker rooms.”

In a 2018 op-ed, Schlafly’s daughter Anne Schlafly Cori, who chairs the Eagle Forum, wrote that the ERA would force men and women to share the same spaces, such as prisons, homeless shelters and domestic violence shelters, schools and sport competitions — echoing similar arguments against expanding transgender rights.

Indeed, proponents of the ERA say it would help advance transgender rights. The ERA could allow challenges to state law that discriminated against transgender people based on the interpretation of the word “sex,” Georgetown Law professor Victoria Nourse testified at the House Oversight hearing last year.

The Alice Paul Institute, named after the author of the ERA, also argues that the ERA would not “make all single-sex institutions unconstitutional — only those whose aim is to perpetuate the historic dominance of one sex over the other.”
“Single-sex institutions that work to overcome past discrimination are currently constitutional and are likely to remain so,” the organization, which has advocated for the ERA, says.

Franke told CNN that the ERA provides a “very different approach to equality” than the one we have today, so the amendment would accommodate these programs that the Eagle Forum is worried about, and ending those programs could be a form of sex discrimination.

The ERA, according to Franke, would allow for “affirmative measures to dismantle existing forms of sex equality.”