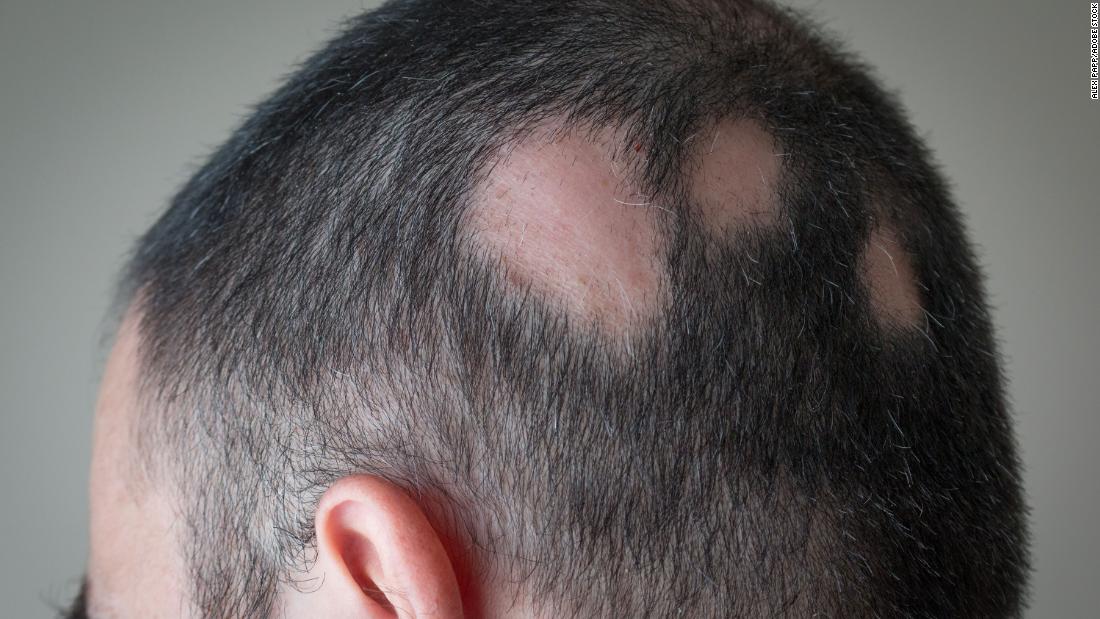 Pinkett Smith has shared publicly that she has alopecia areata, an autoimmune disease that causes hair loss on the scalp and elsewhere, according to the National Alopecia Areata Foundation. Hair follicles affected by the disease are mistakenly attacked by a person’s immune system, which stops hair growth.

“These affected follicles become very small, drastically slow down production and grow no hair visible above the surface for months or years,” according to NAAF.

The condition typically starts in childhood, with one or more small, round and smooth bald patches. But alopecia areata is different from male or female pattern hair loss, which is called androgenetic alopecia, the most common form of hair loss, said Dr. Brett King, an associate professor of dermatology at the Yale School of Medicine. Androgenetic alopecia happens when scalp follicles are hypersensitive to dihydrotestosterone, which is critical for most hair growth but detrimental to head hair growth.

Over the past eight years since discovering a class of medicines called Jak inhibitors could treat this disease, King has “probably seen 700 or more (patients) with severe alopecia areata,” he said.

Sunday night’s events have sparked curiosity about the disease, which affects all genders and races — about 6.8 million people in the United States and 147 million people worldwide. Massachusetts Representative Ayanna Pressley and “Doctor Who” actor Matt Lucas have also publicly shared their experiences of dealing with alopecia areata.

CNN spoke with King about alopecia areata and its causes, spectrum of severity, effects on daily life, and available treatments.

The following conversation has been lightly edited for length and clarity.

Dr. Brett King: There’s a genetic basis for the disease, meaning that people with alopecia areata often have a genetic predisposition to manifesting hair loss. But as with all diseases with a genetic predisposition, the factors that make the disease turn on or off are unclear. If you take identical twins who have the same genes, and one of them has alopecia areata, there’s only about a 50% chance that the other one develops it. So again, there are other factors that we don’t understand that make the disease turn on and off.

It has long been said that the disease is caused by stress, depression, anxiety or other environmental factors. But there’s not a lot of high-quality evidence of that. While stress may be an exacerbating factor for some, it’s not the cause.

CNN: Are any other body parts affected?

King: Hair and nails are both made of keratin, a protein, which may explain why nails can be affected. When nails are affected, typically what you get are pits, as if somebody took a needle and poked a bunch of little indentations in the nail surface. Uncommonly, the nails become very rough and/or brittle and, rarely, there can be loss of nails.

CNN: Does everyone with alopecia lose all their hair?

King: Most often, people with alopecia areata have a spot or a few spots of hair loss. It could be a dime- to a half-dollar-size spot. With treatment, and sometimes without treatment, these spots will often go away. In a handful of people, those spots may go away while new spots appear. Uncommonly — maybe in 10% to 25% of people with alopecia areata — those spots will, over the course of weeks or months or years, progress to severe hair loss or no hair.

King: We don’t know what the factors are that make one person have only mild disease and somebody else have severe hair loss. It’s highly unpredictable, which is one of the things that make alopecia areata so menacing for those who suffer from it.

King: Hair loss is reversible in alopecia areata. In cases where hair is absent for too long, like more than 10 years, it may be permanent.

CNN: What happens to hair loss over time?

King: Alopecia areata is unpredictable, and there’s no way to know if the spots of hair loss that go away today will not happen again for three months, three years or 30 years. What we can say with some confidence is that most people will have a manageable number of spots that will come and go. Last night I ran into someone who said she had a spot 30 years ago. She hasn’t had another spot since then, but she still has the ability to because it’s in her genes.

CNN: What do people with alopecia tend to experience personally?

King: I don’t want to speak for everybody with alopecia areata, but I think I can for most people I’ve seen. For many people with alopecia areata, it feels like disfigurement. Imagine if you woke up today with parts or all of your eyebrows missing — would you have stopped by Starbucks? Or would you have hidden yourself and tried to find answers, thinking something was wrong with you?

Hair expresses individuality and sex. Just Google evolution — the top images are of the Neanderthal with head-to-toe hair. Over time we lost most body hair but retained head and facial hair. Evolution did that for a reason. The hair on our heads is important.

So, hair loss is devastating. You can cover up a few hairless spots, but not 30% or 100% scalp hair loss. You don’t look like yourself, and those who recognized you yesterday don’t today. Eyebrows are really important for facial recognition. And not only that, but what do people think you have? Every time you see a billboard with a hairless face or a woman wearing a scarf on her head, you instinctively think she has cancer and is undergoing chemotherapy. Historically, people have shamed others by shaving their heads. There’s a lot wrapped up in hair. With that severe distortion comes severe anguish.

CNN: Are there any cures or treatments?

What is a little bit different about alopecia areata is that we haven’t in the past had effective treatments, either. That changed with the report of a young man with severe alopecia areata who I treated with a medicine called tofacitinib, which belongs to a class of medicines called JAK inhibitors.

He regrew all his hair. I used this medicine because there was emerging science to show that JAK inhibitors could interrupt the pathological events leading to immune system attack on hair follicles. The report gave hope of effective treatment and led to interest in developing treatments for people suffering from alopecia areata in the pharmaceutical industry.

There are now phase III clinical trials of JAK inhibitors in alopecia areata, which are showing tremendous promise. We are at the precipice of a historic event. For people who have severe alopecia areata, for the first time in history, there’s the possibility that we might be able to reverse their disease, make it better, restore normalcy.

CNN: Do you have any words for people with alopecia areata?

King: Most of these people have been told that there’s no treatment, that they should be happy it’s not cancer, or that it’s ‘just hair.’ But now there’s hope of relief from this often awful disease. These treatments are going to change lives for many of these people. Your suffering is shared by many others and their families also. Find a dermatologist who can take the time to answer your questions and help you understand if these medicines might be helpful for you. But don’t take for an answer that ‘at least you don’t have cancer.’ Let’s keep going until there is effective treatment for everybody.