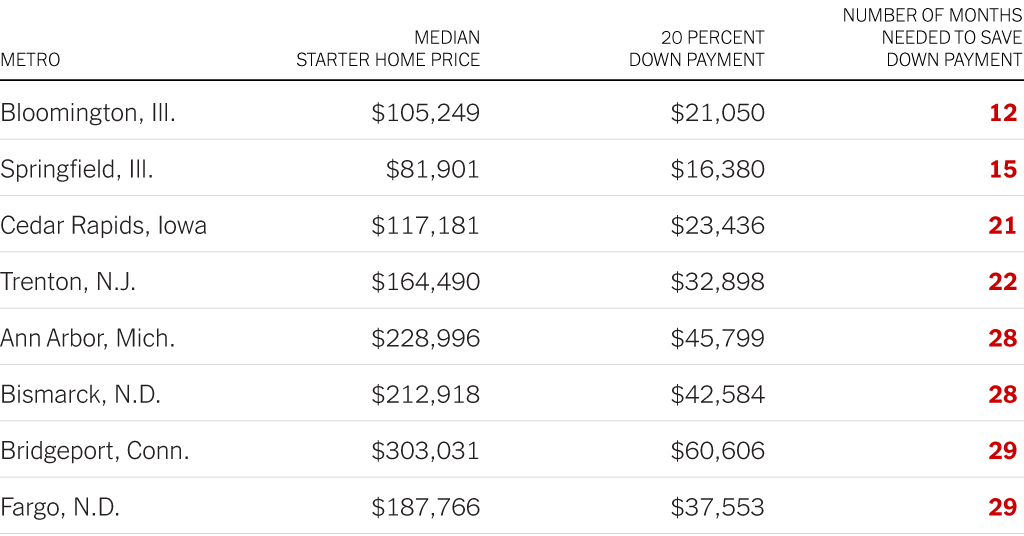 Saving enough money for a down payment on a home can be slow going, but depending on where you live, it doesn’t have to be. A recent study from RentCafe identified the U.S. metropolitan areas where renters can purchase their first home in the shortest amount of time, and found that in 64 metros, a two-person household of median earners can save enough for 20 percent down on a typically priced starter home in less than 10 years.

To compile the list, the researchers employed the “50-30-20” budget formula made popular by Senator Elizabeth Warren, in which 50 percent of income is allocated for unavoidable “needs,” like rent, groceries and utilities; 30 percent goes to “wants,” like eating out, alcohol and entertainment; and 20 percent goes to savings. The median costs of “needs” were culled from census surveys and the Economic Policy Institute’s Family Budget Calculator; “wants” came from the U.S. Bureau of Labor Statistics Consumer Expenditure Survey; and starter-home prices were derived from Zillow.

In many areas, devoting only 50 percent to “needs” seems unrealistic. Even in the 20 metros where saving is reportedly easiest, between 60 and 75 percent of income is required for unavoidable expenses. But in other areas, the confluence of costs, salaries and home prices can result in a surprisingly quick path to homeownership.

Midwestern cities dominate the results, led by Bloomington, Ill., where saving a 20 percent down payment can take just one year. According to the data, a two-income family there earns a median of $91,000, spends 63 percent on “needs,” 15 percent on “wants,” and has 22 percent left to sock away for a starter home costing $105,249. In Decatur, Ill., the study found the two-person household income to be just $69,248. After meeting “needs” and “wants,” only 4 percent of income is left for savings. Still, a 20 percent down payment can be amassed in a little over three years, thanks in large part to the area’s low median starter-home price of $46,696.

Of course, a faster savings rate can be achieved anywhere by reducing spending on “wants,” a short-term sacrifice that can bring one closer to the long-term benefits of homeownership.