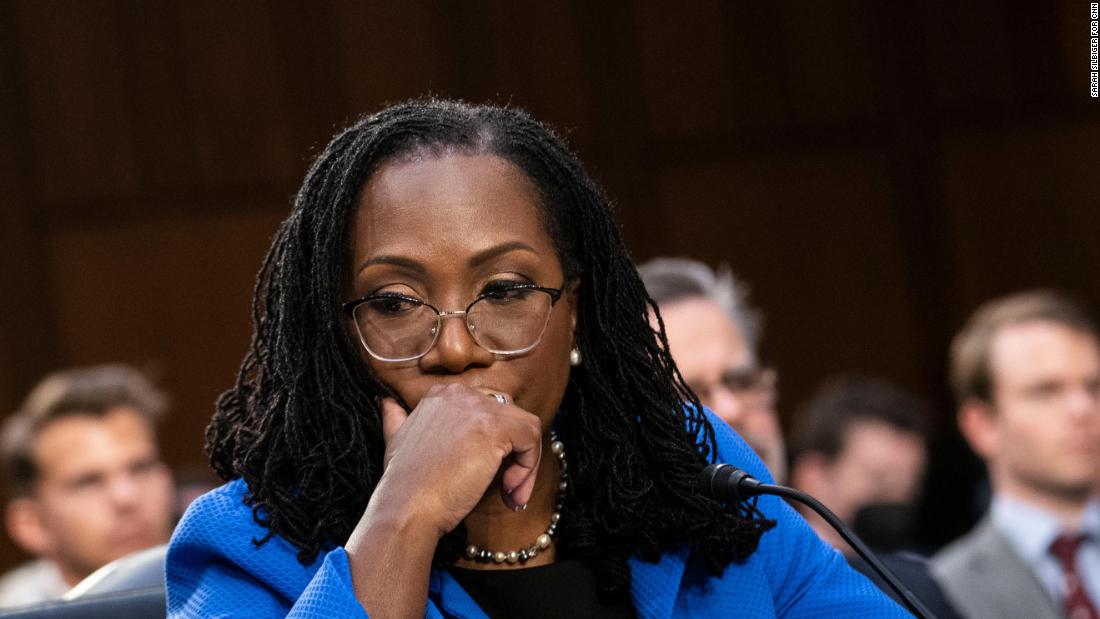 The pushback comes after Jackson spent more than 22 hours before the Senate Judiciary Committee this week and Republicans including Sens. Lindsey Graham of South Carolina, Ted Cruz of Texas and Josh Hawley of Missouri repeatedly suggested that she had been too lenient in sentencing. Supporters of Jackson have complained that Democrats didn’t do enough to put the attacks into context and highlight evidence that she was in line with other federal judges on the issue at a time when guidelines are outdated.

“Tellingly, the same GOP senators who have leveled these smears voted for Trump-nominated judges who sentenced the exact same crime in the same fashion — below guidelines that are widely considered out of date and below sentences sought by the prosecution, as is the norm,” White House spokesman Andrew Bates said Thursday.

“These members are not only smearing Judge Jackson — they are excoriating their own records,” Bates said. “Quantitatively, Judge Jackson departs from the guidelines by less than the average judge.”

The Judiciary Committee is set to vote on Jackson’s nomination on April 4. A full Senate vote could take place as early as that week as well. Democrats can confirm Jackson’s nomination to the Supreme Court without Republican support if every member of their caucus votes in favor, which appears on track to happen, and Vice President Kamala Harris breaks a tie.

The White House reviewed a story by The Washington Post that examined how some district judges who were nominated to the appeals court under Trump handled sentencing in child pornography and whether they followed the prosecutor’s recommendations. The Post found at least 18 instances when six GOP judges elevated to the appeals court did not follow the prosecutors’ recommendations.

For instance, Judge Amul Thapar, who had once been on Trump’s list for the Supreme Court, is also a favorite of Senate Minority Leader Mitch McConnell, a Kentucky Republican, and now sits on the 6th US Circuit Court of Appeals.

When he served as a district court judge in the Eastern District of Kentucky, he sentenced a defendant for production of child pornography in United States v. Sherman to 360 months — 30 years — when his guidelines were life and the government recommended 1,080 months — 90 years. A review of the transcript shows Thapar struggling with the case, taking into consideration various factors including the futures of the defendant’s children.

In her testimony, Jackson spoke about all the factors she considered when handing down sentences. Hawley read extensively from court transcripts depicting the factors that Jackson considered.

In the end, Thapar concluded that while 100 years would be a deterrent he was not convinced that these “healthy sentences” aren’t accomplishing “as much deterrence as we want.”

For his confirmation to an appeals court, Thapar received the support of Republican members who still sit on the Senate Judiciary panel, including Sens. Chuck Grassley of Iowa, Graham, John Cornyn of Texas, Mike Lee of Utah, Cruz, Ben Sasse of Nebraska, Tom Cotton of Arkansas, John Kennedy of Louisiana and Thom Tillis of North Carolina.

Another judge, Joseph Bianco, when he was serving on the US District Court for the Eastern District of New York, sentenced one defendant for distribution of child pornography to 60 months when his guidelines were 151 to 188 months and the government had asked for more.

Bates stressed that the judges, like Jackson, had departed at times from the guidelines or what the prosecution had requested.

“And in the overwhelming majority of her cases involving child sex crimes, the sentences Judge Jackson imposed were consistent with or above what US Probation Office or the government recommended,” Bates said.

A CNN review of the material showed that Jackson had mostly followed the common judicial sentencing practices in these kinds of cases and that Hawley took some of her comments out of context.

At the hearing, Hawley pressed Jackson repeatedly about a handful of cases where he said she had departed from the guidelines. At one point he criticized her for saying that she alone had studied the entirety of the case before handing down a sentence –highlighting one case in particular.

“As you’ve emphasized to this committee over and over, you’ve lived it, right? You said that you’ve been through all of this. You’ve looked at the images. You’re the one who’s had to endure all of it. You gave him a three-month sentence. I just wonder if you regret it or you stand by it.”

Growing exasperated, Jackson said that in every case, “I followed what Congress authorized me to do and looking to the best of my ability at all of the various factors that apply that constrain judges that give us discretion but also tell us how to sentence.”

Later she added, “What I regret is that in a hearing about my qualifications to be a justice on the Supreme Court, we’ve spent a lot of time focusing on this small subset of my sentences.’

Retired federal judges — including two Republican appointees — had already filed a letter with the committee maintaining that Jackson’s sentences were “entirely consistent” with the records of other judges across the country. They noted that to the extent she had departed from guidelines it was within the mainstream of what other judges were doing nationwide, in part because bipartisan and unanimous reports from the US Sentencing Commission had strongly criticized the guidelines’ treatment of child pornography as “unduly severe” in so-called non-production cases, in which the defendant looked at pornography but did not manufacture, produce or purvey it.

Jackson herself explained why the guidelines were often outdated. She noted that the guideline was crafted at a time when more serious child pornography offenders were identified “based on the number of photographs that they received in the mail.” But the introduction of the internet led to extreme disparities in the system, “because it is so easy for people to get volumes of this kind of material now,” she said.