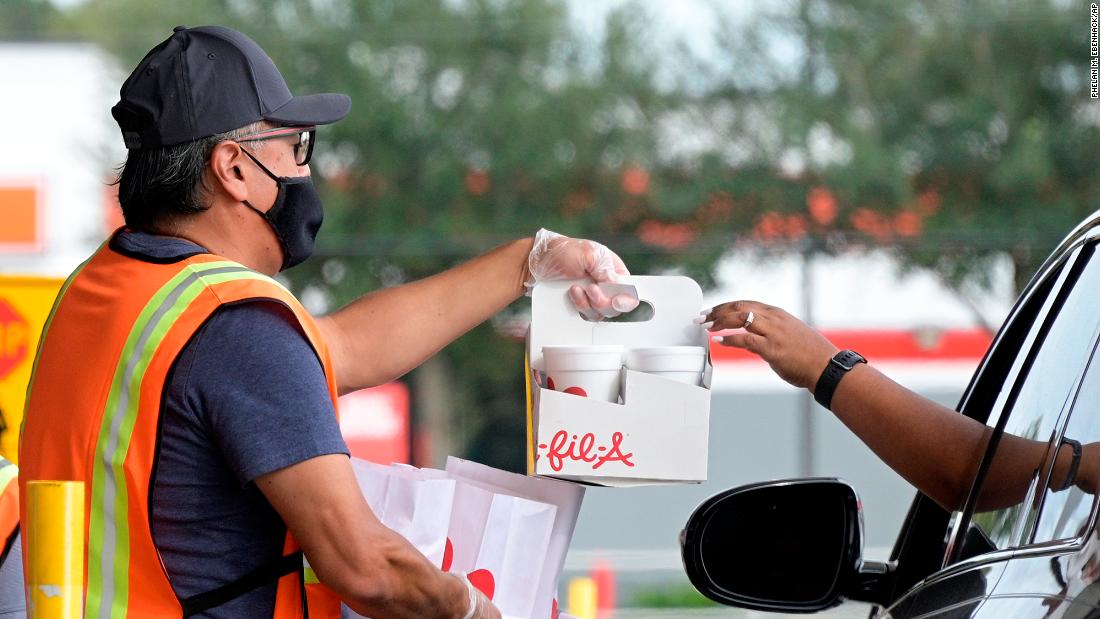 But two decades ago, Chick-fil-A borrowed a tactic from The Ritz-Carlton that would become a central element of its brand culture: Employees replying to customers who thank them by saying “my pleasure,” instead of “you’re welcome” or “no problem.”

Although it’s a small gesture, the polite response fits into Chick-fil-A’s positioning as a chicken sandwich chain with hospitable service, along with putting flowers on tables and employees going outside to take customers’ drive-thru orders while they wait in their cars.
It “all fits into the broader perception of Chick-fil-A as a family-run, fast-food place with better quality service than most,” said Adam Chandler, a journalist and the author of “Drive-Thru Dreams.“
The origins of the pleasantry began in 2001, at the company’s annual seminar for franchise owners, according to Steve Robinson, Chick-fil-A’s former longtime marketing chief, in his book “Covert Cows and Chick-fil-A.”

Chick-fil-A founder Truett Cathy told the group a story about visiting a Ritz-Carlton. Whenever Cathy thanked a hotel employee, the worker would smile and respond, “my pleasure.”

At the time, Chick-fil-A, which Cathy started in 1946 in Hapeville, Georgia, was trying to expand beyond the South and distinguish the brand nationally from fast food chains with a reputation for subpar customer service.

Cathy, a devout Southern Baptist who has attributed his chicken empire success in part to his Christian faith, believed using the phrase would surprise customers and stand out in the fast food industry. He once called it a “head-turner,” according to the company.

So he asked Chick-fil-A managers and staff to start saying “my pleasure” when customers thanked them, but many were initially hesitant, according to Robinson.

It wasn’t until 2003 — when Cathy’s son Dan, who later became CEO, started saying “my pleasure” himself and pushing others to follow suit — that it became an unwritten rule at the company, as it remains today.

“It dawned on me that this could be a service signature for us, almost like two pickles on a sandwich,” Dan Cathy said. Chick-fil-A leaders tapped a marketing executive to overhaul its entire service strategy, which grew to include training workers to greet customers with a smile, make eye contact and speak in an enthusiastic voice.

‘My pleasure and Chick-fil-A go hand in hand’

Today, “my pleasure” is a brand catchphrase and part of the popular lore around Chick-fil-A, which had 2,730 outlets and hit nearly $16 billion in sales in 2021, according to Technomic, a food industry research and consulting firm. (Chick-fil-A is privately-held by the Cathy family and is now led by a grandson of Truett Cathy, who died in 2014.)

“My pleasure” is printed on Chick-fil-A souvenir t-shirts and is the name of a fan podcast. Rumors often swirl on social media that you’ll get free food if you say “my pleasure” to an employee. (You won’t.)

Like closing on Sundays — Truett Cathy once said “it’s a silent witness to the Lord when people go into shopping malls [on Sunday], and everyone is bustling, and you see that Chick-fil-A is closed” — saying “my pleasure” is a symbol of the company’s ethos.

The chain’s “calling cards of being closed on Sunday and saying ‘my pleasure’ are nearly as important to the brand identity as the food,” said Adam Chandler.

Although Chick-fil-A has been a polarizing company in the past for its opposition to same-sex marriage and support for anti-LGBTQ organizations, it has ranked atop the American Customer Service Index for limited service and fast food chains for seven years in a row.

Of course, workers simply saying “my pleasure” isn’t why the company tops customer service rankings. But “my pleasure and Chick-fil-A go hand in hand,” said Emily Gilmore, a manager at a Chick-fil-A in Concord, North Carolina.

It sometimes takes new employees a while to get used to the phrase, she said, but it eventually becomes second nature — even when they’re not on the job.

“I say it at home too. It drives my husband absolutely crazy,” Gilmore said. “He says ‘Can’t you just say, you’re welcome?’ And I’m like ‘No. I can’t.’ It just comes naturally to me now.”