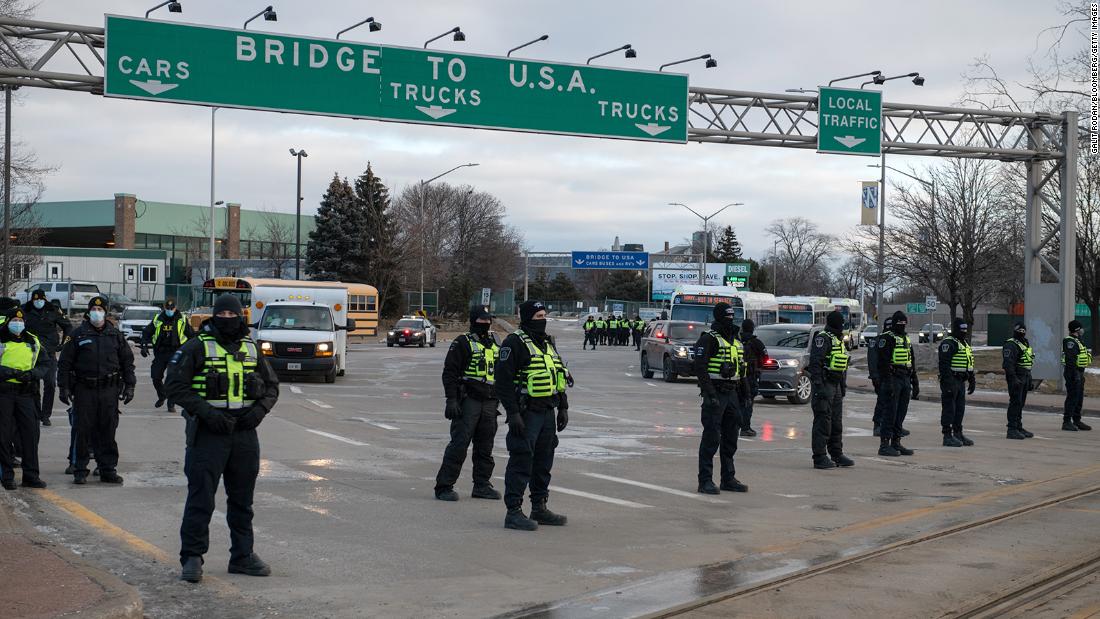 And the Ambassador Bridge, which separates the US and its neighbor to the north, may be the most economically important one-and-a-half miles of roadway in the Western Hemisphere. Until this past week it got very little attention for the crucial role it plays in the economies of the two nations.

A total of $664 billion worth of goods moved between the two countries last year, according to US Commerce Department data. The state of Michigan estimates 30% of the total moved over the privately-owned Ambassador Bridge linking Detroit and Windsor, Ontario. An estimated 10,000 commercial vehicles cross the bridge daily.

But not this past week.

Protesters angered by vaccine mandates in Canada essentially shut down the bridge starting Monday night, and halted the flow of goods over the bridge by blockading the ramps on the Canadian side. Business groups sounded alarms about the massive costs caused by the closure, but police did not move to clear the bridge and arrest protesters until Saturday morning. (As of late Saturday afternoon the bridge was still essentially blocked by protesters.)

The fact is, the economies of Canada and the United States are closely intertwined in ways citizens of both probably don’t realize or take for granted.

Since goods generally move across the border with limited tariffs or other taxes, factories on one side of the border depend on suppliers from the other. Experts say there isn’t a car built in the United States without Canadian parts, and vice versa.

While Canada doesn’t have its own locally-owned auto industry, it is home to plants for most of the major global automakers serving the North American, including General Motors (GM), Ford (F), Chrysler owner Stellantis, Toyota (TM) and Honda (HMC).

“Essentially, automotive supply chains treat that border as it would a state border,” said Bernard Swiecki, director of research at the Center for Automotive Research, a Michigan think tank. “Financially speaking, that international border might as well not be there.”

The difficulty in moving goods between the countries this week have produced a host of economic problems, and not just in Michigan, where workers this week lost an estimated $51 million in wages due to the blockade, or in Windsor, Ontario, considered the Detroit of Canada.

Factories as far away as Toyota plants in West Virginia, Kentucky and Alabama, as well as a Ford plant producing Super Duty pickups in the Cleveland suburb of Avon Lake, Ohio, were forced to temporarily halt or reduce their operations. So did a plant in the Toronto suburb of Brampton, Ontario which builds Chrysler 300s, Dodge Chargers and Dodge Challengers.

The Great Lakes separating the eastern United States and Canada limit the number of places where it’s possible to cross the border by land between the eastern portion of the two nations. While there’s a tunnel between Detroit and Windsor, it’s generally closed to commercial traffic because it doesn’t have the customs facilities the bridge has.

Another bridge links Port Huron, Michigan, and Sarnia, Ontario, but the route involves a 150-mile detour, and it’s had its own share of protests this week, making it risky for trucks to try to cross the border there.

Rising 152 feet above the Detroit River, the 92-year-old Ambassador Bridge is only two lanes wide in either direction.

An alternative bridge is under construction roughly a mile away, but it isn’t due to open for at least two more years. It will have three lanes in each direction and be named for Gordie Howe, the Canadian-born hockey superstar who played for the Detroit Red Wings.

While the auto industry got most of the attention this week due to the concentration of the industry in Detroit and Windsor, it’s not the only industry depending on the bridge.

“A lot of manufacturing, a lot of goods, depend on the bridge. It’s not just autos,” said Stephanie Brinley, principal analyst with IHS Markit.

She said the closures come at a bad time for automaker and other manufacturers. Global supply chain problems have caused widespread delays and shortages and increased prices for parts and raw materials, forcing many to trim production.
All major automakers had periods over the last year when they were forced to temporarily close factories or trim production, as did some manufacturers in other industries.
Those factors have been a major factor in US prices rising at the fastest pace in nearly 40 years. While a weeklong closing of the Ambassador Bridge alone is unlikely to affect car prices for consumers, it has driven up costs for automakers who have had to pay extra to ship goods by air.

“Our supply chain is pretty fragile right now,” said Brinley. “We don’t need another kink in the works.”