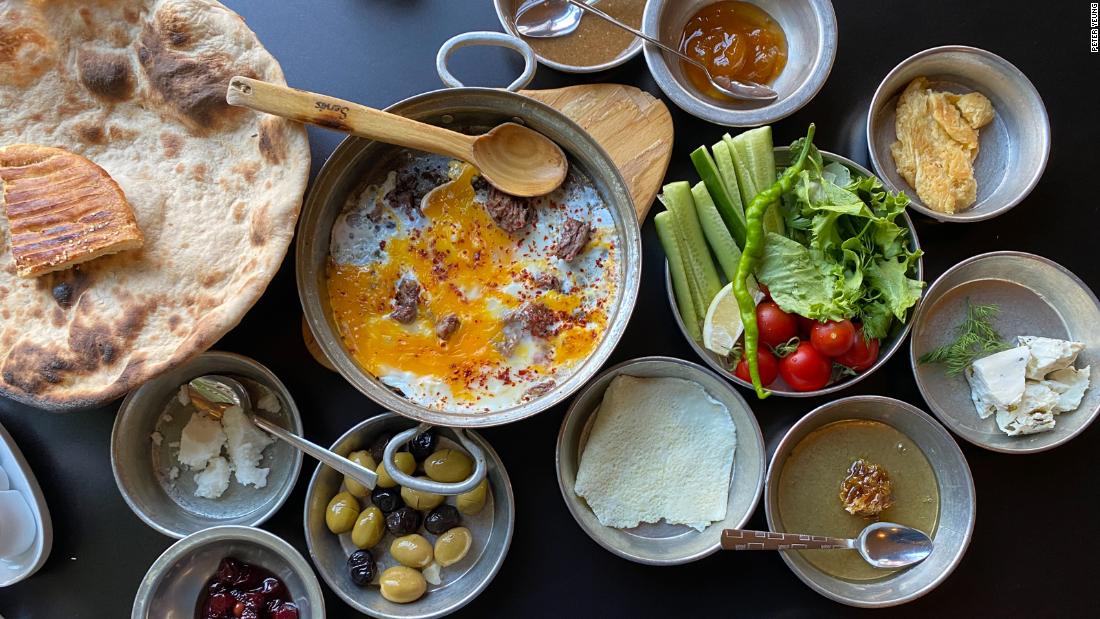 Editor’s Note — This CNN Travel series is, or was, sponsored by the country it highlights. CNN retains full editorial control over subject matter, reporting and frequency of the articles and videos within the sponsorship, in compliance with our policy.

(CNN) — Hours before the sun rises over Van, a city in the far east of Turkey fringed by rolling hillsides and a spectacular lake, preparations are already well underway for the most important meal of the day.

By 5 a.m., the scent of oven-hot flatbreads and freshly brewed Turkish tea is wafting across Kahvaltıcılar Çarşısı — Van’s famous so-called “Breakfast Street” — as dozens of traders open for business to serve up the region’s ritual morning feast.

Over the course of each day, thousands will pass through this cobbled pedestrian street thought to be Ground Zero for the world’s capital of breakfasts.

“There is nothing except breakfast during the day here,” says Kenan Coşkun, who, along with his brother, runs one of the oldest breakfast joints in the city, Sütçü Kenan.

“I mean, no bagels, no sandwiches, no soup, no patties, no kebab, no lunch, no fish in the evening, no live music, no hookah, no alcohol. Breakfast only.”

While Turkey is famed for its breakfasts, Van is the capital of the epic, sprawling serpme kahvaltı, or breakfast spread. These morning banquets can contain up to 30 different dishes, and they often have a heavy emphasis on the prized dairy produce from livestock that graze on the surrounding Anatolian plateaus.

Often these breakfasts will be served with more traditional Turkish dishes like tahini and grape molasses; cacık, a thick dip made of yogurt and cucumber; a rainbow of jams from sour cherry to walnut and apricot; as well as pots of local honey (or in the best places, entire slabs of honeycomb) and plates of fragrant raw vegetables.

“You have to have lots of different small plates of local delicacies,” says Aylin Oney Tan, one of Turkey’s leading food writers. “That is what Van’s breakfasts are all about. There won’t be space for anything else on the table.”

Van is located close to Turkey’s borders with Iraq, Iran and Syria.

The origins of Van’s legendary breakfast culture are the subject of debate. According to Tan, it emerged in the mid-20th century as farmers from the nearby villages would bring their produce to the city’s bus terminal early in the morning for sale.

“They set up these very small breakfast joints, with fresh, puffy pide bread, churned butter and cheeses,” she says.

Others point to the earlier precedents of Ottoman culinary culture and Van’s location on the Silk Road, an ancient trade route linking the Western world with the Middle East and Asia that would have supplied a constant flow of ravenous travelers.

But locals say the more modern history of Van breakfasts can with certainty be linked to the development of so-called “milk houses” — which would serve early morning meals of milk, cheese and bread to laborers — in the 1940s.

A traditional Van breakfast can contain dozens of dishes.

Sütçü Kenan, which translates from Turkish as “Milkman Kenan,” was itself opened by Coşkun’s great-grandfather Kenan in 1946 and its management has been passed down for three generations through the family since.

“Years ago the breakfast hall was a dairy shop,” says Coşkun. “At the time of our great grandfather, villagers met for coffee early in the morning before working in the fields or construction. Someone brought eggs from home, someone brought bread, someone cheese and olives. They shared them and prepared a table.”

Away from the madding crowd of Breakfast Street, Bak Hele Bak, which was founded in 1975, is another restaurant in the old tradition of milk houses. It is also one of the few establishments still serving up the traditional rose petal jam.

“Ours is a place coming from milk house culture,” says Yusuf Konak, the talkative 67-year-old owner. “We created this breakfast culture. We have all kinds of customers from ages 7 to 70 — politicians, writers, teachers, all kinds of normal citizens. Is Van the breakfast capital of the world? Definitely.”

That might seem like a lofty claim, but Van has its place in the record books to back it up. In 2014, more than 50,000 people gathered at rows and rows of tables in front of the Van Fortress, which was built in the ninth century BCE, to break the Guinness World Record for the “largest full breakfast attendance.”

Local authorities have even submitted an application for the region’s distinctive breakfast to be added to the UNESCO Intangible Cultural Heritage List, which already features the world famous Neapolitan pizza, Belgian beer and Singapore’s street hawker culture.

The right way to start the day

Özge Samanci, head of the gastronomy and culinary arts department at Ozyegin University in Istanbul, says that Van’s breakfasts, which were boosted by the rise in tea consumption in the 1940s, now play an important social function.

“The major role occupied by breakfast, and its importance for the Turkish community, has become even more evident in the past few years,” he says. “It’s a moment for families and it is considered the most important meal of the day.”

The tradition has become so popular that Van-style breakfast salons have opened up all over the country, including the Meşhur Van Kahvaltı Sarayı and Eylül Yöresel Kahvaltı Salonu in the capital Ankara and Van Kahvaltı Evi in Istanbul.

But back in Van, the age-old breakfast culture continues to lay down new roots even now. Matbah-ı Van, which opened in 2020, is one of the pioneering new places in town, focusing on a menu of 12 organic-only dishes.

Matbah-ı’s bread is baked in a traditional clay tandoor oven, the butter is churned by hand in a nearby village and a cooperative of local women harvests the distinctly floral honeycomb from the surrounding highlands.

“I tried to create that home environment, here, a little, I dreamed of the breakfast tables that I dreamed of in my childhood,” says owner Gonca Güray. “We want to recognize that history. It’s not right to start a day without breakfast.”