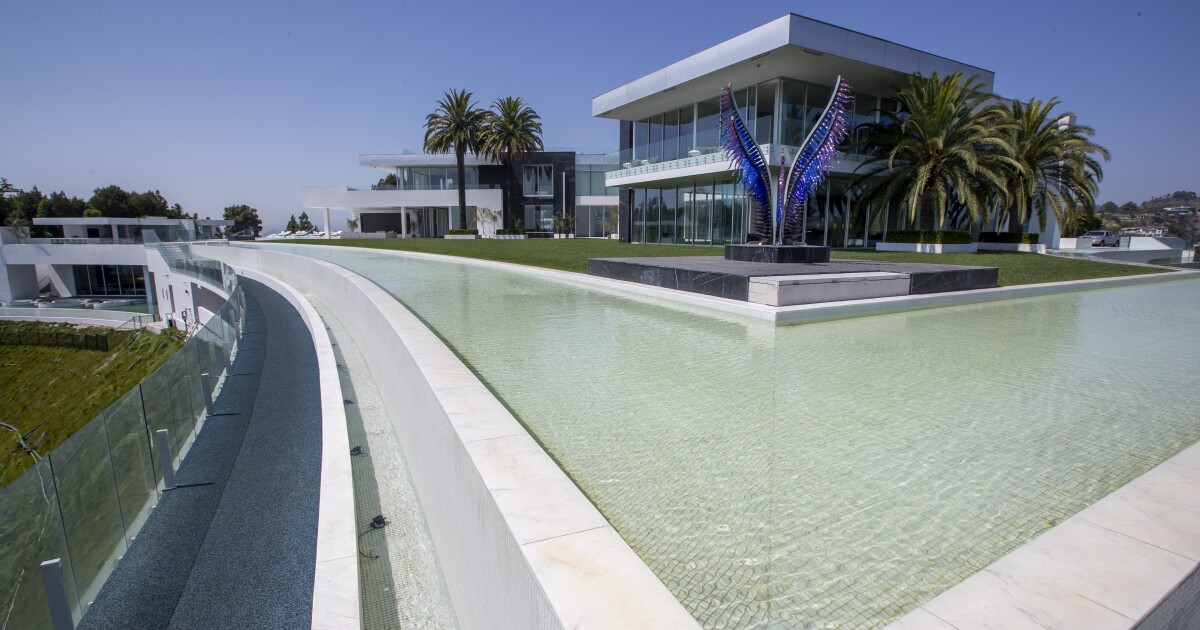 Though Fashion Nova founder Richard Saghian’s $141-million offer for the mega-mansion known as The One was the high bid at a bankruptcy auction this month, it may not be enough to close the deal.

The event was held within a week of Russia’s invasion of Ukraine, and creditors disappointed that the winning bid was less than half the home’s $295-million list price are asking U.S. Bankruptcy Court Judge Deborah Saltzman for a do-over.

“It cannot be that the fear of this war and with the potential for World War III … did not impact [the] bidding auction process,” said Hamid Rafatjoo, the attorney for The One’s developer Nile Niami, at a Friday hearing. “That war scared everyone.”

Niami, who claims he is owed $44.4 million in loans made to the project, had hoped to assemble a last-minute $250-million offer for the home he considers the culmination of his development career, but that fell apart.

Saltzman had been expected to make a decision Friday on whether to approve Saghian’s $126-million bid, which totaled $141 million with auction fees. But like most everything else associated with the 105,000-square-foot Bel-Air estate — still unfinished after nearly a decade of construction — things went slower than anticipated. What participants thought would be a short hearing morphed to more than five hours of argument and testimony from attorneys, the home’s brokers, Saghian and others.

Saltzman, who cited case law that might allow her to set aside a bid if it were deemed “grossly inadequate,” said there was too much on the line for her to make a decision on the spot and instead scheduled closing arguments for Monday, when she promised a decision.

On one side are Saghian, property owner Crestlloyd, a handful of creditors and others who would benefit from closing the deal — and who say the war is far from the only reason the mansion fetched such a low price. On the other are additional creditors, a couple of which could lose $10 million or more apiece and want a chance on a second auction. The home carries claimed debts that top $250 million.

Attorneys for the creditors that oppose the sale have alleged irregularities in the bid procedures and made other legal arguments, but seemed to view the Russian invasion as their trump card, even if they conceded it was unlikely the conflict would end anytime soon.

Kyra Andrassy, an attorney for Inferno Investment, which has lodged about $31 million in claims against the estate, compared the war to the outbreak of COVID-19, arguing that while the world was stunned in the early days of the pandemic, people eventually learned to live with it.

The prevailing counter-argument was simple: that the situation in the Ukraine might continue or get even worse, meaning there’s a chance a new auction would bring in an even lower price.

“It’s all speculation what happens tomorrow, next week. World War III happens in two months and we’re in this for God knows how long,” argued Thomas Geher, attorney for Hankey Capital, the real estate lending arm of L.A. billionaire Don Hankey, which lent more than $100 million to Crestlloyd but is first among lenders to be at least partially repaid and supports the sale.

There was talk of any new auction being held within the next few months given the cost that comes with keeping the home in bankruptcy, which involves expenses such as upkeep and paying attorneys and other professionals.

Sale backers noted that no other “bona fide” offers had come forward in the weeks since the auction, even though Crestlloyd had said after the auction concluded March 3 that it would welcome further bids.

But opponents said that despite a worldwide marketing effort — one broker testified he flew to London and Paris to meet prospective buyers — only five bidders participated in the auction, evidence they said the war scared away bidders. However, that figure was roughly the number of bidders long expected by Concierge Auctions, the online luxury auction house that conducted the event, according to attorneys in support of Saghian.

Those who want to kill the bid also pointed out that Crestlloyd had argued in court papers the 944 Airole Way property was worth $325 million. They also highlighted an appraisal conducted in 2019 while the house was under construction that valued the property at $228 million, evidence they said the high bid was grossly inadequate. Supporters countered the appraisal was bloated to boost the home’s cachet.

Rayni Williams, one of the home’s brokers, who will share in commissions totaling about $2.5 million if the sale is approved, acknowledged she was disappointed in the final bid and said she had hoped it would set a record — apparently alluding to the $238 million a hedge fund mogul spent in 2019 for a penthouse overlooking New York’s Central Park, a U.S. high-water mark.

As it was, the sale didn’t even break the California record set by venture capitalist Marc Andreessen, who purchased a Malibu estate for $177 million in October.

Williams testified that she came to learn as she met with prospective buyers that the unfinished home’s lack of a certificate of occupancy was an impediment to a sale, which she said likely reduced the number of buyers for a home that already had a tiny buyer pool.

“Buyers usually want — especially at this purchase price — to move right in,” said Williams, who added that a second auction could be “very harmful” as it would “optically … look like a failure to the open market.”

An obstacle to getting a certificate of occupancy is the stance of the Bel-Air Assn., a local homeowners group that sent a letter to Crestlloyd and building officials vowing to investigate alleged construction defects at the mansion and possible zoning violations that came to light when the property was in state receivership last year.

The group has already appealed permits given to two other Niami homes and supported residents who sued developer Mohamed Hadid over an illegally constructed Bel-Air mansion now being torn down. Fred Rosen, a board member of the homeowners group, attempted to speak at the hearing but was not allowed to do so after objections he had no standing.

However, Concierge Auctions President Chad Roffers seemed to bear out some of the group’s concerns when he testified the mansion was damaged by the record rainfalls in late December, forcing Crestlloyd to scramble to make fixes so it could be shown.

He also said the lack of a certificate of occupancy and the association’s involvement with getting the Hadid house torn down was a red flag to “highly qualified buyers.”

“As they started to peel back the layer, you know, of the onion, and start to understand the complexity and uncertainty in terms of a path to a C of O, it became a greater and greater headwind,” Roffers said. “I was on the phone with a potential bidder the day of the auction in London who was interested, however, ultimately were totally freaked out by the lack of C of O and then the publicity around the Hadid property.”

He also noted, however, that the $141-million bid was 48% of the list price, which he said was the exact same discount at which Niami’s last three homes sold. “In preparing for this I was doing my homework on recent transactions,” he said. “It’s uncanny.”

If the bid is not approved, Saghian’s attorney, Sam Newman, warned that the fashion mogul may “lose interest and move on to the next thing.” Saghian, recently deemed a billionaire by Forbes, already owns two area homes, one in the Hollywood Hills he spent $17.5 million in 2018 and another on a Malibu beach that he purchased last year for $14.7 million.

Newman said his client was recently made aware of a Los Angeles Department of Building and Safety notice potentially ordering The One’s roof removed.

The Times viewed a copy of the notice, which alleges the building and stair and elevator tower projections exceed height limits and need to be rectified. It also states the property owner can seek a permit to allow the structures.

Saghian’s attorney warned that his client was facing a more complex situation than he anticipated when he made the winning bid. “No one knows how much more money will have to be poured into this property,” Newman said.

Even so, when Saghian was sworn in to testify, he seemed almost giddy about the prospect of owning the house. Saltzman asked him about a peculiarity of the auction that has caused some wonder: Why, after he placed a winning $120-million bid that no one had topped, did he bid again for $126 million?

Roffers testified the move was not uncommon and was called a “power bid” meant to scare away any more competition. Saghian had another answer.

“I took a couple of seconds to think about it and I picked my lucky number,” he said. “It’s 26. Sounds pretty crazy. But when I got the house I thought it was meant to be.”