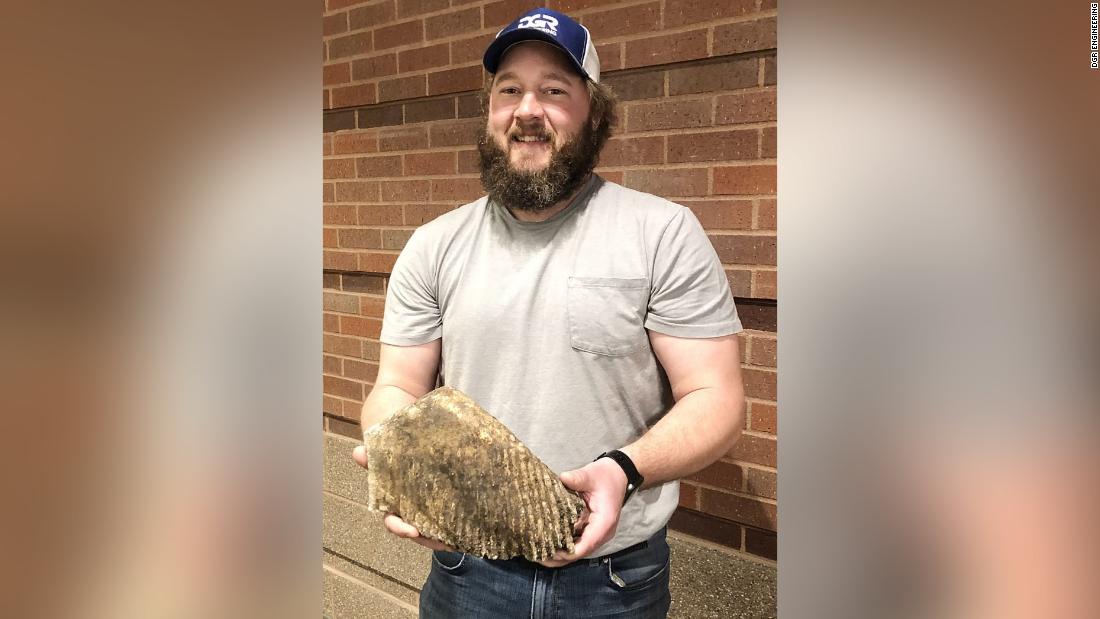 But Blauwet had a better idea of what it was, thanks to a lifelong interest in pre-historic animals: a wooly mammoth tooth likely dating back tens of thousands of years.

Blauwet was observing a construction site on March 4 on property owned by Northwest Iowa Community College in Sheldon when he spotted the tooth, according to a Wednesday news release from his employer, DGR Engineering.

He said he recognized the tooth thanks to a deep knowledge of fossils and pre-historic creatures. “I’m a ‘nerd’ like that,” he told DGR, adding that his two young sons are also passionate about fossils and dinosaurs.

The company asked Tiffany Adrain, a paleontology repository instructor at the University of Iowa, to examine the find. She confirmed it was a genuine wooly mammoth tooth.

“They evolved to basically take advantage of a grazing niche, eating a lot of abrasive vegetation like grasses,” he said. This particular specimen was likely a mammoth in its 30s, based off the degree of wear on the tooth, according to Widga. “This would be an adult in the prime of its life,” he said.

Experts believe that wooly mammoths went extinct as late as 4,000 years ago. The Ice Age giants could reach as tall as 13 feet at the shoulder and wandered the planet for hundreds of thousands of years: The world’s oldest DNA sequence was recovered from a mammoth tooth over a million years old.

It’s more common to discover individual mammoth teeth than bones or complete remains, Widga said, as they are made of enamel, which is denser and “more robust to the kinds of things that break down a skeleton.”

Over time, a tooth may erode out of the original area where it was deposited and find itself in a new deposit, away from the rest of the remains. Their distinctive appearance also makes them more likely to be noticed than other types of fossils.

And Northwest Iowa is “kind of a hotspot” for mammoth finds, Widga noted, with discoveries tending to range between 24,000 and 15,000 years old.

In general, mammoth remains tend to be found in one of two geologic contexts: gravel deposits and swampy, clay deposits. “One of the cool things about Iowa is, given its geologic history, it has a lot of really interesting Pleistocene fauna, Ice Age animals,” Widga explained.

Around 18,000 years ago, the central part of Iowa was covered with ice. But the edges of the state were exposed — and these areas tend to turn up mammoth remains.

In 2013, the remains of three mammoths were discovered after flooding dislodged the bones, according to CNN affiliate KCCI. The bones were estimated to be between 14,000 and 16,000 years old. Sites with multiple animals are fairly rare, according to Widga.

Blauwet’s discovery is expected to soon have a new home at the Sheldon Prairie Museum at Northwest Iowa Community College. Sheldon is located around 60 miles northeast of Sioux City.

“We are happy to display the tooth in the Sheldon Prairie Museum as a semi-permanently loaned display,” said college president Dr. John Hartog, according to DGR’s news release. “This way, everyone from across our service area can come to the museum to see and appreciate this artifact.”