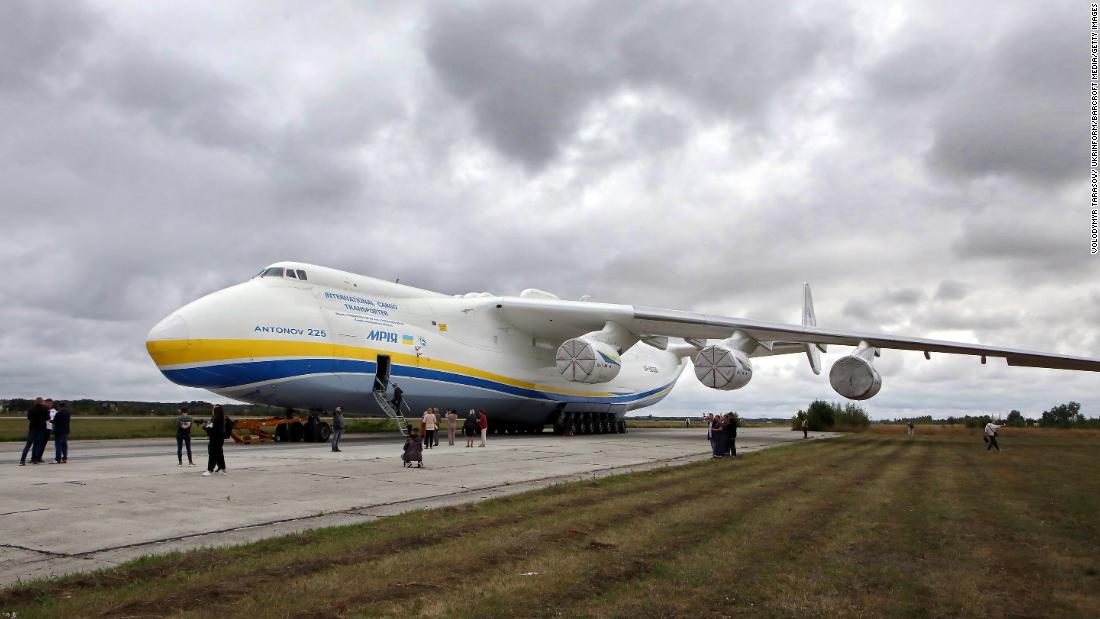 (CNN) — The world’s largest aircraft, the Antonov AN-225, has been destroyed during the Russian invasion of Ukraine, according to Ukrainian officials, generating alarm and sadness among the aviation world in which it occupies almost cult status.
The enormous aircraft, named “Mriya,” or “dream” in Ukrainian, was parked at an airfield near Kyiv when it was attacked by “Russian occupants,” Ukrainian authorities said, adding that they would rebuild the plane.
“Russia may have destroyed our ‘Mriya’. But they will never be able to destroy our dream of a strong, free and democratic European state. We shall prevail!” wrote Ukrainian Foreign Minister Dmytro Kuleba on Twitter.
There has been no independent confirmation of the aircraft’s destruction. A tweet from the Antonov Company said it could not verify the “technical condition” of the aircraft until it had been inspected by experts.
Ukrainian state defense company Ukroboronprom, which manages Antonov, on Sunday issued a statement saying the aircraft had been destroyed but would be rebuilt at Russia’s expense — a cost it put at $3 billion.

“The restoration is estimated to take over 3 bln USD and over 5 years,” the statement said. “Our task is to ensure that these costs are covered by the Russian Federation, which has caused intentional damage to Ukraine’s aviation and the air cargo sector.

In a later statement, the company said the airplane had been in on the ground near Kyiv on February 24 undergoing maintenance.

“According to the director of Antonov Airlines, one of the engines was dismantled for repairs and the plane wasn’t able to take off that day, although the appropriate commands were given,” it said.

Russian forces claimed to have captured Hostomel airfield, where the AN-225 was located, on on Friday. A CNN team on the ground witnessed Russian airborne troops taking up positions.

If confirmed, the attack would mark a shocking end to an aircraft that has seen more than 30 years of service dating back to the days of the Soviet Union.

The AN-225 was sometimes drafted in to help airlift aid during crises in other countries. In the aftermath of the 2010 Haiti earthquake it delivered relief supplies to the neighboring Dominican Republic. During the early days of the Covid pandemic it was used to transport medical supplies to affected areas.

Its popularity in the aviation world meant it often drew large crowds wherever it went, particularly when it made star appearances at air shows.

Some of its fans took to social media on Sunday to express their dismay at claims of the aircraft’s destruction. “Mriya – You will always be remembered!” wrote aviation blogger Sam Chui on Twitter.

To this day, Mriya remains the heaviest aircraft ever built. Powered by six turbofan engines, she has a maximum payload weight of 250 tonnes, which can be carried inside or on its back. It boasts the largest wingspan of any airplane in operational service.

Only one An-225 was ever built by the Kiev-based Antonov company, which came up with the design. It first took flight in 1988 and has been in service ever since.

Construction was begun on a second plane, but it was never finished.

The story of the An-225 begins back in the 1960 and ’70s when the Soviet Union was locked in a race into space with the United States.

By the end of the 1970s, the need arose for transporting large and heavy loads from their places of assembly to the Baikonur Cosmodrome, the sprawling spaceport in the deserts of Kazakhstan that was the launchpad for Yuri Gagarin’s pioneering space voyage of 1961.

The cargo in question was the Buran spacecraft, the Soviet Union’s answer to NASA’s Space Shuttle. Since there were at the time no airplanes capable of carrying it, the Antonov company was ordered to develop one.