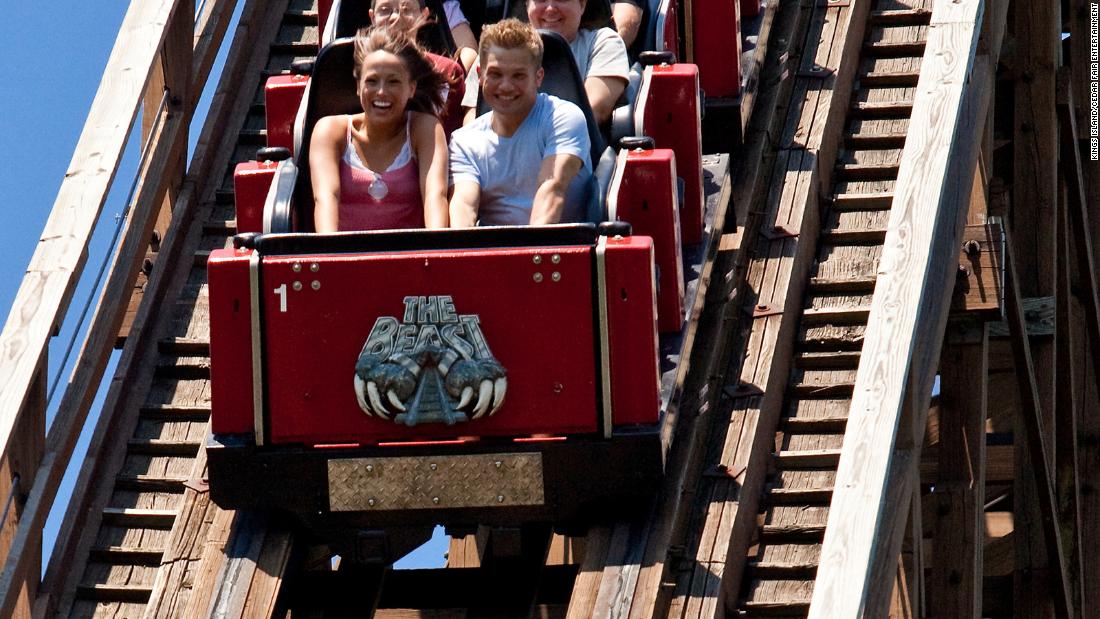 The Beast apparently isn’t going to rest on its laurels though. The park announced in a news release Wednesday that it’s going to extend the track by 2 feet, solidifying its grip on the record by 24 inches.

How long is The Beast exactly?

Refurbishment of The Beast started in November.

The Beast has been a length of 3,759 feet (or 1,146 meters) in its long life. But when it opens in May, riders will enjoy those 2 extra feet because of “offseason retracking and reprofiling work,” the release said.

Obviously, those 2 extra feet (.6 meters) are going to fly by pretty darn fast. Perhaps more important and more noticeable to the thrill-seekers on the ride will be a steeper first drop.

Kings Island said it “has been reprofiled from 45 degrees to 53 degrees so that it can come into the tunnel lower and deliver a buttery-smooth transition through the first tunnel and onto the second drop.”

Crews began refurbishing 2,000 feet (610 meters) of the coaster’s track back in November.

Other features of the coaster

So how much time will it take to cover the new 3,761-foot track? That’s four minutes and 10 seconds of ride time. Some other hair-raising, yell-inducing Beast stats from Kings Island:

• An underground tunnel at the bottom of that 137-foot drop is 125 feet long.

• That’s just the first tunnel — there are two more.

• Eight banked turns and a 540-degree helix tunnel near the end.

The Beast has earned its name according to Martin Lewison (aka Professor Roller Coaster).

Martin Lewison, an associate professor of business management at Farmingdale State College on Long Island in New York, is known as “Professor Roller Coaster.” He schooled CNN Travel on Wednesday evening on what it’s like to ride The Beast.

“I’ve ridden it many times. It’s definitely a must-ride if you go to Kings Island. It’s iconic,” Lewison said.

“For years and years, it was my No. 1 wooden coaster. It’s really an experience.”

Lewison said the design makes it a ride like no other coaster.

“It practically has chapters to it. It’s basically two giant halves,” he said. “It actually has two lift hills — for a wooden coaster, that is quite unusual.”

His favorite part is when train flies through the surrounding woods.

“It’s amazing at night. Part of the excitement is running over the terrain. You’re just sort of careening through the dark.”

He gave special mention to the 540-degree helix.

“The second lift hill goes in a giant helix. It’s just so intense. Every time I ride this, I look at my wife and say, ‘This is insane.’ “

Lewison said part of the excitement of a wooden coaster is that it is supposed to feel rickety. “When you hit that helix, you feel like the coaster wants to tear itself apart.”

The Brady Bunch did not ride this coaster

Part of the fun of The Beast is how it weaves through woodlands and uses the lay of the land to enhance the ride.

Fans of the classic ABC sitcom “The Brady Bunch” may fondly recall the episode of the family’s outing to Kings Island, the madcap misadventures of losing and finding the father’s architectural blueprints — and the ending sequence with the family enjoying a ride on a wooden coaster.
However, Alice, Mike, Carol and the kids missed The Beast by six years. The cast filmed their scenes at the park in the summer of 1973 and took a ride on The Racer, with Eve Plumb (Jan) and Mike Lookinland (Bobby) in the front seats.
The Racer, actually two coasters on twin tracks that “race” side by side to see which train pulls back into the station first, has been with the park since its opening in 1972.

Kings Island Amusement Park will celebrate its 50th anniversary this year, and it now has 15 roller coasters.

Top image: This view of The Beast shows just how much territory the coaster covers. (Kings Island/Cedar Fair Entertainment)