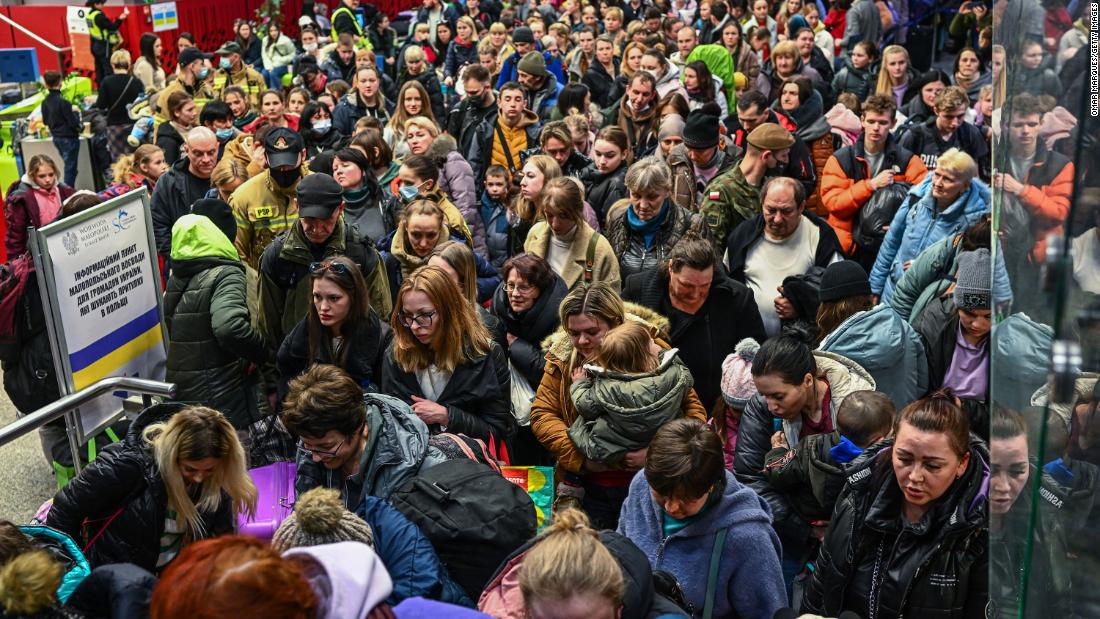 Google says searches about how to help Ukrainian refugees have been spiking in the United States, in addition to other questions about the crisis.

Some queries come from people trying to find donation drives in their neighborhoods. Others were focused on events unfolding on the other side of the world.

Here’s a look at some of the questions the Google Trends team says have been coming up most often, and what we know so far about the answers.
More than 3 million refugees have fled Ukraine in less than three weeks, according to the United Nations. Nearly 2 million more have been displaced internally within the country.

Where are most Ukrainian refugees going?

So far, most Ukrainian refugees have gone to Poland. More than 1.8 million Ukrainians are there, according to UN statistics. Large numbers of Ukrainians are also in Romania, Moldova, Hungary, Slovakia and Russia.

Are Ukrainian refugees coming to the US?

Not in the same large numbers we’re seeing in Europe. Since October 2021, at least 690 Ukrainian refugees have been admitted to the United States, according to State Department data.

But more Ukrainian refugees could start coming to the United States soon, depending on what steps the Biden administration takes.

Multiple sources have told CNN the administration is discussing ways to help Ukrainian refugees join family members already living in the US by providing special pathways for their admission. That’s something Poland’s president has been pushing for; last week he asked Vice President Kamala Harris to speed up and simplify the procedures allowing Ukrainians with family in the US to come here. The US refugee resettlement process typically can take years.

How can I help Ukrainian refugees?

Food and other supplies inside Ukraine are becoming increasingly scarce, and civilians continue to flee the country, seeking safety. Organizations are on the ground in Ukraine and neighboring countries to help with shelter, food, water and other needs.

Amid the harrowing accounts of tragedy in Ukraine, CNN’s audience has contributed more than $5.9 million to the humanitarian relief work, according to Public Good, the online donation platform partnering with CNN. You can find out more about how to help here.

Can I host a Ukrainian refugee family?

Can I sponsor a Ukrainian refugee?

There’s currently not a way for Americans to sponsor particular Ukrainian refugees to help them come to the United States. But nonprofits that work with refugees in the US say there are many options for volunteering and community sponsorship to help refugees from around the world.

Can I help house Ukrainian refugees in the US?

If a large number of Ukrainian refugees do end up coming to the United States, housing is going to be a key issue. Already this year refugee resettlement agencies and advocates have been struggling to find affordable housing for many of the tens of thousands of Afghan evacuees brought to the United States in Operation Allies Welcome.

Late last year the US government announced the creation of a new “Sponsor Circles” program to help provide support to arriving Afghans. So far there’s no initiative like this in the US for Ukrainians. But US officials have said they plan to launch a new private sponsorship pilot program for refugees this year — an initiative that’s being welcomed by advocacy groups.

Can I adopt a Ukrainian orphan refugee?

This is a question the State Department says it’s been hearing a lot as well. But the department notes that Ukraine isn’t approving any children to participate in the hosting programs abroad that often serve as a first step in the adoption process, and that meeting the extensive legal requirements for an international adoption is “exceptionally difficult” during times of crisis.
The State Department also says there are also other important details to keep in mind:

• Determining whether children who appear to be orphans truly are eligible for adoption and immigration under US laws in these circumstances can be “extremely difficult.”

• Sometimes children are temporarily separated from parents or other family members during a conflict. Their parents may be looking for them.

• Children are often cared for by other relatives after their parents have died.

• During crises, some children who are not orphans live in orphanages for safety.

CNN’s Priscilla Alvarez and Ryan Bergeron contributed to this report.