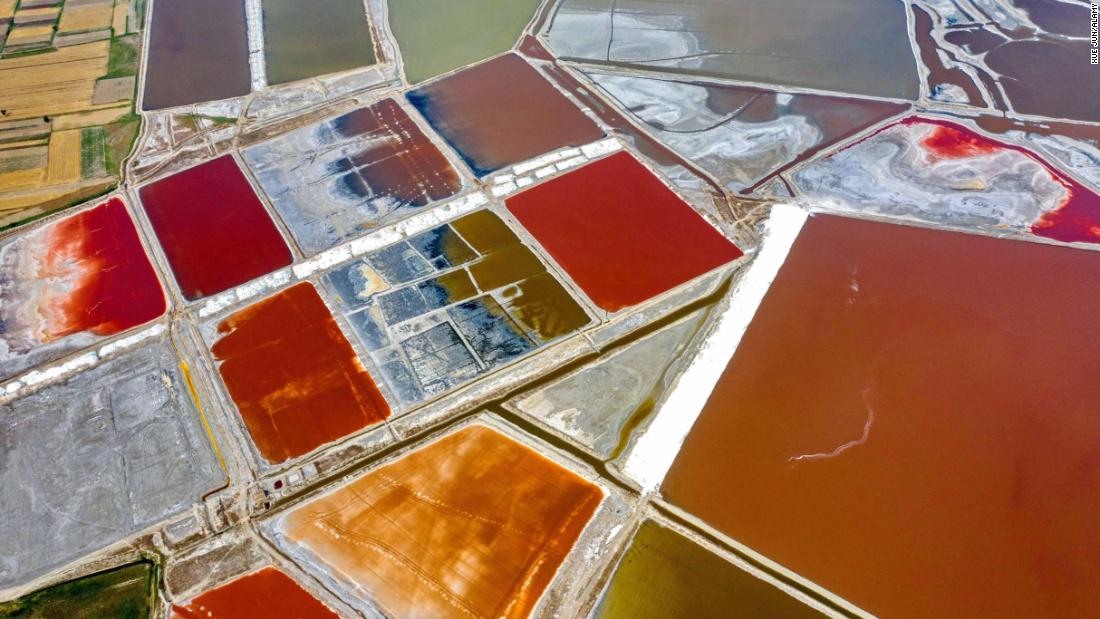 (CNN) — Xiechi Lake, also known as Yuncheng Salt Lake in China’s Shanxi province, has become popular on Instagram and other social media websites in recent years thanks to eye-popping aerial photographs of its colorful surface.

Recent tourism campaigns on Chinese social media sites including Weibo and WeChat refer to Xiechi as “China’s Dead Sea” and tout both its beauty and its healing properties.

“As the Chinese version of Israel’s Dead Sea, floating here is an unforgettable experience, and one you can’t find anywhere else,” reads a tourism ad sponsored by the appropriately named Yuncheng Salt Lake (China’s Dead Sea) Tourism Development Co. LTD.

One accolade stands out as a sign of the lake’s endorsement at the highest levels: Xiechi Lake was featured in a 2019 Chinese TV special celebrating the 70th anniversary of the founding of the People’s Republic of China.

Salt crystals form on the top of Xiechi Lake.

How the wonder was formed

There are three kinds of salt lakes in the world: carbonate, chloride and sulfate. The Dead Sea and the Great Salt Lake in Utah are both chloride lakes. Yuncheng, however, falls into the last group.

“If the sulfate in your water is greater than the calcium, all the calcium is used up, which leaves you with an excess of sulfate and you have a sulfate lake,” explains Hong Kong Baptist University geography professor Bernie Owen.

Xiechi is also a “closed basin” lake — meaning it doesn’t flow out to a river or ocean — which explains how its salt content stays so high.

But what about those gorgeous colors that have made the lake so popular with photographers? They have to do with the species of animals and plants living in the water.

“if you’ve got brine shrimps, you tend to get red colors,” says Owen. “There’s a microscopic animal called a rotifer, and that will give a purple color. Purples you (also) tend to get with green algae. And then greens or oranges (occur) in very saline lakes.”

It is possible for salt lakes to freeze over, although not as quickly as other lakes — after all, think about what happens when we spread salt over icy roads. Saltwater freezes at lower temperatures than freshwater.

An aerial view of Xiechi Lake

A lake becomes a star

In an effort to boost Xiechi Lake’s international profile, China is reportedly taking steps to get it listed as a UNESCO World Heritage site.

In a 2019 WeChat post, Luo Huining, party secretary of Shanxi Province, announced that local officials had begun the application process.

“Yuncheng Salt Lake is the crystallization of Chinese culture and civilization. The salt lake has positive significance for promoting our cultural confidence and heritage,” he said at the time.

China has heavily focused on UNESCO bids, which can be expensive and time-consuming, as a way to confer international legitimacy on its many historical and natural wonders.

Currently, China has 56 such World Heritage sites, placing it second only to Italy on the total list. That feat is even more impressive considering that the country’s first crop of UNESCO designations — which included the Great Wall and Forbidden City — only came in 1987.

Two more such recognitions would tie China with Italy for the top spot on the UNESCO list.

There’s some good news for wannabe travelers who hope to visit Xiechi Lake — it isn’t yet as popular or crowded as other tourist spots in China.

Tiger Li of travel company Diverse China tells CNN that he has only organized a few visits there. Nearly all the visitors so far have been Chinese domestic travelers.

That is likely to remain unchanged as long as China remains mostly closed to international tourism. The country closed its borders in early 2020 and remains one of the few destinations in the world still adhering to a “zero Covid” strategy that includes very strict quarantine policies.

“Besides the scenery, I think the mud bath and other experiences are the key reason they go (to Xiechi Lake),” Li says.

According to a statement from the Yuncheng city government, Xiechi Lake contains black mud with restorative and healing properties — just like the Dead Sea.

The document goes on to claim that people can float along the surface of the water without sinking — also, coincidentally, just like the Dead Sea.