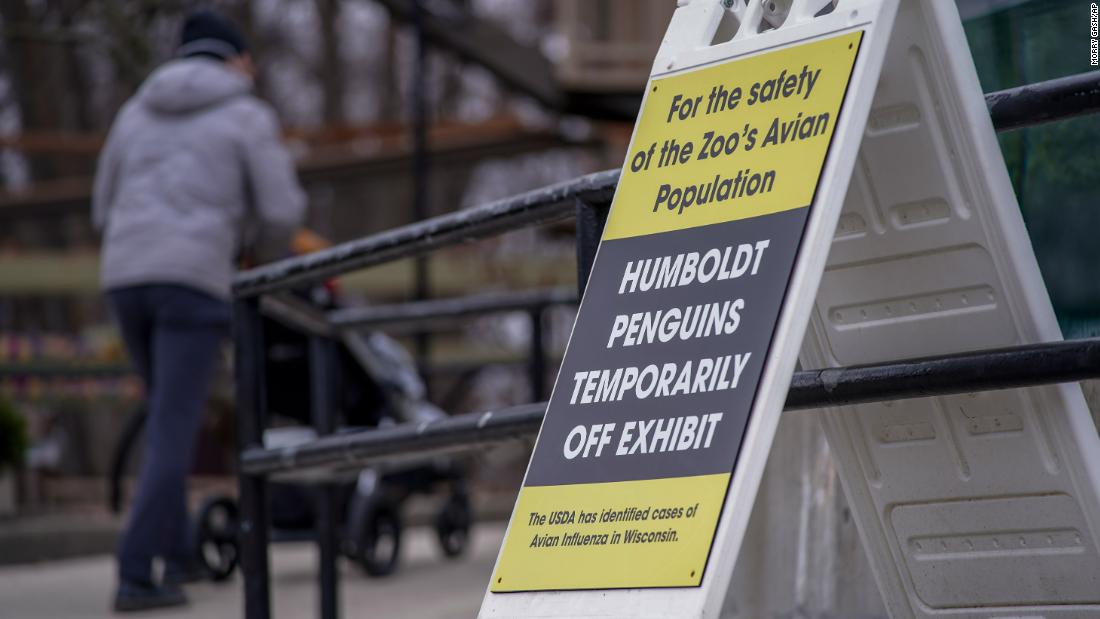 Cases of Highly Pathogenic Avian Influenza (HPAI) have been rising in backyard flocks and wild birds across dozens of states in recent months, prompting zoo officials to temporarily shut down bird exhibits.

“This strain of the disease is highly contagious and lethal to birds,” the Maryland Zoo in Baltimore said in a statement on its website. “As a precautionary measure, we have closed our aviaries and moved several of our bird species to behind-the-scenes facilities with limited human contact until the threat of avian influenza has subsided.”

Birds in zoos could get infected by wild birds, humans or a new bird introduced to the facility.

The disease caused by the flu has been detected in commercial and backyard flocks across 24 states and in wild birds across 31 states, according to the department.
The Type A viruses naturally spread among wild aquatic birds worldwide and can infect domestic poultry along with bird and animal species, according to the US Centers for Disease Control and Prevention. They don’t usually affect humans, it said.

The spread has led zoos in Pennsylvania, Colorado, Michigan, Wisconsin, Texas and Ohio in addition to Maryland to take preventative steps, including closing outdoor bird exhibits and moving the birds indoors for their safety.

The Association of Zoos and Aquariums (AZA) established the Zoo and Aquarium All Hazards Partnership program, which collaborates with zoos to create a plan before outbreaks occur.

Preventative measures include putting up tarps or netting around the exhibits, closing walk-through aviaries to the public and implementing strong quarantine protocols, according to Rob Vernon, AZA’s senior vice president for communications and strategy.

“Facilities are going to be in full response mode to protect their birds for at least the next couple of months until transmission decreases,” Vernon told CNN in a statement.

In an effort to prevent infections, zoos have taken various steps to keep their birds safe.

The Pittsburgh Zoo & PPG Aquarium has barred the public from accessing birds including ostriches, chickens and owls. Visitors may see flamingos and penguins through the glass of their indoor habitats.

In Colorado, the Denver Zoo moved its birds indoors for at least 28 days, it said in a statement.

“By bringing these animals indoors, we can more closely monitor them and prevent contact with wild birds who may be carriers of HPAI,” Duncan said in a February news release from the Detroit Zoo.

The Maryland Zoo is adhering to a multi-tiered response plan reviewed by the USDA as well as other state departments, it said in a statement.

The zoo, which has the largest colony of African penguins in North America, has not detected cases — but the case count is close enough to move its birds indoors, according to its senior communications director, Mike Evitts.

“We are hatching penguin chicks as part of a plan to increase their numbers with the Association of Zoos and Aquariums breeding program as part of a global conservation effort,” he said.

Prompted by an abundance of caution, the Milwaukee County Zoo’s Aviary and Humboldt Penguin exhibit has temporarily closed, according to its website.
The Dallas Zoo also moved its birds away from public-facing enclosures “until the threat has passed,” saying animal health experts will continue to monitor and follow protocols as needed, the zoo said in a statement.

Ohio’s Columbus Zoo also shuttered some bird habitats as they undergo monitoring and evaluation, according to its director of communication, Jen Fields.